​There seems to be a weird obsession with Tottenham midfielder Harry Winks.

A player who constantly draws debates over his place on the over or underrated continuum, what his best position is and whether he's superior to Arsenal's Matteo Guendouzi - a Twitter special - Winks should've made things a little clearer after his display against Manchester City on Sunday.

In what was Spurs' best result since 'that night in Amsterdam', the Lilywhite faithful got a glimpse of their future with Jose Mourinho. Steven Bergwijn scored on debut, Giovani Lo Celso and Japhet Tanganga continued their fine form while Tanguy Ndombele was, well, Tanguy Ndombele. The Frenchman dazzled in a 20-minute cameo that included a superb assist and a lightning-quick stepover to send poor old Rodri back to the Wanda Metropolitano.

It was Winks, however, who was the catalyst for it all.

After the hosts were fortunate not to be at least 3-0 down before the hour mark, it was the 24-year-old's lung-busting run after intercepting a questionable Riyad Mahrez corner that ultimately tilted the match in his side's favour. Winks proceeded to drive past Ilkay Gundogan before forcing Oleksandr Zinchenko into a cynical tactical foul, forcing referee Mike Dean into brandishing a second yellow card for the Ukrainian international.

That run epitomised not only Winks' but Spurs' performance overall. And while his driving run was the game-changer in Sunday's game, the Lilywhites' victory over a wasteful City side may well prove to be a turning point in the Mourinho era.

Similarly, victories over the Cityzens - whether it be the 4-1 in 2015, the 2-1 on Valentines Day 2016 or the 2-0 in Pep Guardiola's first season at the club - defined and shaped the Mauricio Pochettino era in north London, albeit with a completely different philosophy to the one on display at the Tottenham Hotspur Stadium on Sunday. 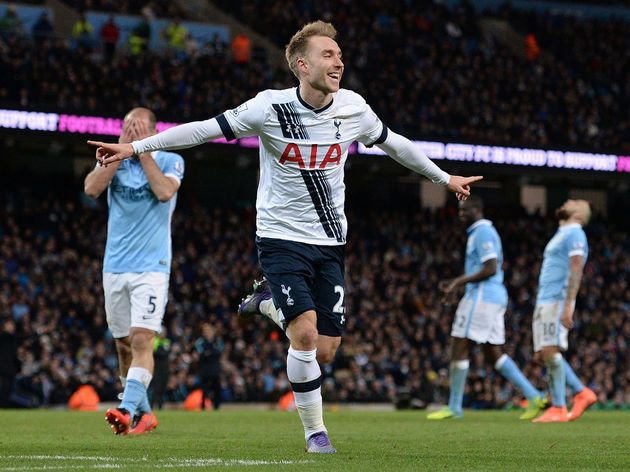 But anyway, back to 'Winksy', as he's commonly known.

Throughout the 90 minutes on Sunday, the midfielder - this time lined up as the deepest in a three alongside Lo Celso and Dele Alli - was his typical tidy self in the middle of the park, bar an under-hit pass out wide for Serge Aurier early in the first half.

He did a great job, especially in the second period, at starting the home side's attacking transitions, occasionally bursting away from midfield pressure before finding one of Spurs' electric front three. When the visitors were reduced to ten men, Winks' ball retention skills came to the fore, often playing off one or two touches to beat the City press and link-up with the likes of Lo Celso and substitute Ndombele.

But it was out of possession where the England international really impressed.

A lot of his superb work was unquantifiable. Winks' tenacity in midfield was crucial in forcing the City stars into early crosses and passes they simply didn't want to make, while he pressed intelligently rather than erratically. By the time Davinson Sanchez had rattled his own crossbar and the 90 minutes were up, Winks had covered 11.44km, second to only Lo Celso (11.78km) on the Spurs side.

While generally seen as a 'fine' footballer, Winks has been connoted as someone who won't be able to take Spurs to the 'next level' - a player who's too safe in possession, too lightweight in midfield and just isn't good enough defensively. And while these judgements are by no means delusional, Sunday's game felt like a coming of age display by Winks in a position where he's struggled in the past, against such a relentless attacking force. You have to take into account that over the past year, Winks has been part of double pivots that've included the technically deficient Moussa Sissoko, a disillusioned Christian Eriksen and on the odd occasion, an immobile Eric Dier. When playing alongside the technically elite Lo Celso and, briefly, Ndombele, he thrived in a deeper midfield role.

Overall, the 24-year-old proved he could become a pivotal part of the Mourinho era. Defensively he's swiftly improved under his new manager and certainly looks capable of playing as the defensive midfielder in most games. Although Mourinho will be warier of utilising Winks deeper against sides who are deadly in transition as opposed to teams likes City, who enjoy playing over shorter distances - something that benefits Winks.

Nevertheless, there's no doubt playing Winks in a midfield three with Lo Celso and Ndombele would see him shine. There'd be less onus and expectation on him to progress play - something he's more than capable of doing, by the way - and making an impact in the final third - he only has four goal contributions in 128 appearances for Spurs. And being one of the Lilywhites' own, Winks is someone that just 'gets it'. He plays with a passion that is unmatched in the Spurs squad - Paulo Gazzaniga a close second - and it was shown on many occasions in Sunday's victory.

Whether it be psychotic air punches after Zinchenko's sending off, the roar at the crowd after 'Stevie Wonder's' - Martin Tyler's words - opener or almost headbutting Hugo Lloris after his penalty save, Winks simply understands the magnitude of representing his boyhood club.

So not only did the performance against City