Tottenham have released a statement revealing that, following a review from an independent neurologist, defender Jan Vertonghen did not suffer a concussion during the team's Champions League semi final first leg loss to Ajax on Tuesday night.

The Belgian endured a sickening clash of heads with teammate ​Toby Alderweireld but, after undergoing a substantial patch-up job on a bleeding nose, he was allowed to re-enter the field.

A further update on @JanVertonghen.#COYS

However, moments later, Vertonghen took himself wearily to the touchline, where he appeared to retch several times while struggling to stay stable on his feet. This lead to plenty of calls of negligence on the part of the ​Spurs' medical staff, especially after the referee and his officials appeared skeptical when learning the centre back would return to the field.

However, in an official ​statement on their website, the club revealed: "Following a thorough review over the past 48 hours by our medical staff as well as by an independent neurologist with special interest in sport-related concussion today (Thursday), it has been concluded that Jan Vertonghen did not suffer a concussion during Tuesday’s ​Champions League semi-final first leg against Ajax.

"The Belgium defender suffered an injury to his nose due to a challenge during the game which resulted in heavy bleeding. He was deemed fit to continue playing after an on-field assessment. All Football Association concussion guidelines were followed." 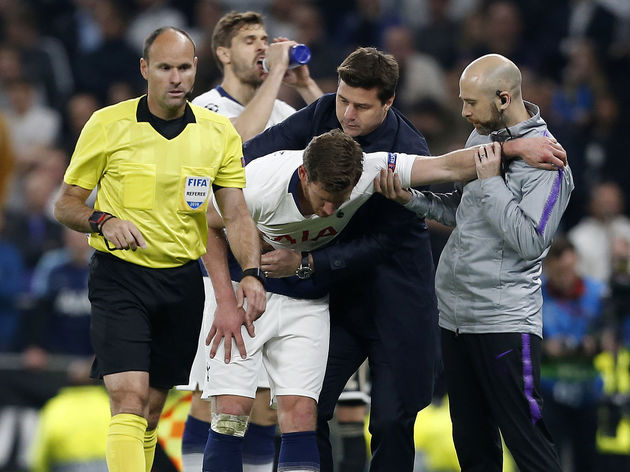 The club explained the centre back had actually suffered symptoms closer to a faint, continuing: "Jan was immediately withdrawn as a result of the player informing medical staff that symptoms were developing suddenly and that he no longer felt stable standing up. We have been advised that this was the result of a presyncopal episode, a near faint.

"The specialist has recommended that the player undertakes a brief period of rehabilitation before returning to training."