Kieran Trippier will have to wait to discuss his future until after the Champions League final, after Tottenham decided to place a blanket ban on all transfer talk until the showpiece event has passed.

The 28-year-old has linked with a surprise move to Serie A, with Napoli thought to be interested in snapping up the full-back despite some indifferent performances this season.

He has remained first choice full-back in north London, keeping Serge Aurier on the sidelines, but it's claimed by the Evening Standard that Spurs are willing to listen to offers for Trippier this summer, providing their valuation of £40m is matched. 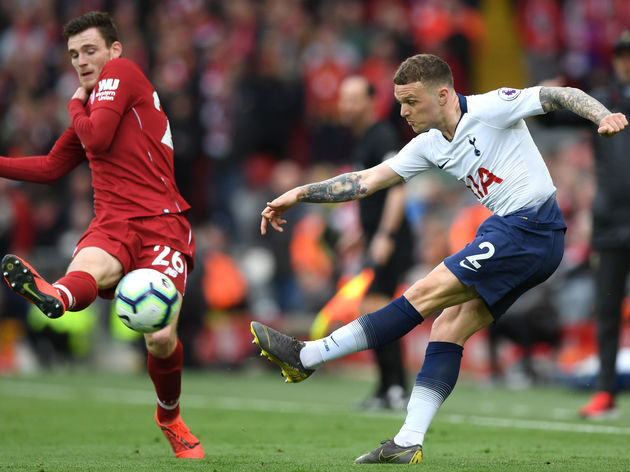 He won't, however, be entertaining talks over his future until the Champions League final has passed, with manager Mauricio Pochettino and chairman Daniel Levy deciding to dismiss any talk of incomings and outgoings.

That means talk over the futures of Christian Eriksen and Toby Alderweireld will be put on hold, even though the pair only have one year left on their current deals.

Trippier, meanwhile, has courted interested from Manchester United in recent months, though it's understood that the Red Devils are not prepared to fork out and match Spurs' lofty asking price.

As a result, Napoli are now thought to be frontrunners in the pursuit of Trippier, but they too would be looking to reduce the asking price.

Looking forward to the day that I have to explain to my children that yes, in the summer of 2018, people in England genuinely did believe for a few weeks that Kieran Trippier was the best right-back in the world.

After starting his career at the Manchester City youth system, Trippier made a name for himself at Burnley before joining Spurs four years ago.

He further enhanced his reputation last summer with a starring role in England's World Cup campaign, but poor performance have dogged him this season, and a summer exit can't be ruled out - particularly if Spurs follow through on their vow to strengthen their squad this summer.