​Tottenham manager Mauricio Pochettino has hailed his side's progression into the Champions League semi finals as a 'reward from the universe'.

In a dramatic quarter final second leg at the Etihad against Manchester City, VAR's decision to rule out a late Raheem Sterling strike sent Spurs through in nail-biting fashion. 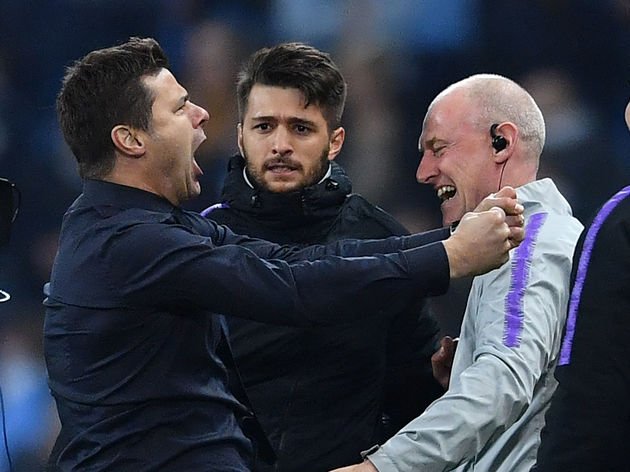 With an immediate reunion with Pep Guardiola's side on the horizon at the weekend when they meet in the ​Premier League, Pochettino spoke of the feeling of 'destiny' about his side's triumph on Wednesday.

He said, as quoted by the ​Daily Mail: "I believe in the universe. In November it was not destiny. At the beginning of the season, nobody believed that destiny was going to reward us.

"And five years ago, nobody believed we would be here. You need to work hard, to have the option to be rewarded by the universe."

After Sterling's goal seemed to send ​Spurs crashing out at the quarter-finals stage, Pochettino relived the agonising moments in which he felt that his side's Champions League dream had ended in heart-breaking fashion.

The Argentine added: "I threw off my jacket, threw down my jumper and went to sit next to Jesus and Toni Jimenez - it was a few seconds like this (putting his head in his hands).

"It was so fast. There were a lot of bad feelings and bad ideas." When asked if it would have been the lowest moment of his managerial career, he replied: "In that moment, yes, of course. It was going to be a massive situation emotionally.

See you in the semi-finals, @AFCAjax! #UCL ⚪️ #COYS pic.twitter.com/p0UNVNoRNn

"We would have been very down. In that moment, you start to think, 'Why?' You think of that action where Christian Eriksen played the pass back. 'Why not play forwards?' I was reviewing the action, the decision, in my head. How was I going to face the players? The fans? You guys?

"All these scenarios happened so quickly in my mind. And then I heard Jesus’s voice saying, 'Oh, maybe it is offside, VAR checking', and in that moment I was alive again. I understand the situation on City’s bench; from top of the world down, disappointed. That is unbelievable, the emotion we lived was amazing."