Brighton striker Neal Maupay has claimed that Tottenham's players 'looked worried' and their 'heads went down' after the Seagulls early goal in Saturday's encounter.

​Tottenham Hotspur's torrid week went from bad to worse as a 7-2 demolition by Bayern Munich was followed by a 3-0 dismantling at the hands of Brighton on Saturday.

The North London club have lost their last two games with an aggregate score of 10-2 and to add injury to insult, their captain Hugo Lloris sustained a dislocated elbow against the Seagulls. 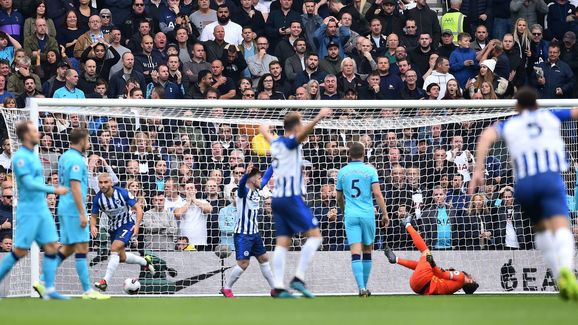 All is clearly not well at the Tottenham Hotspur Stadium, and question marks have been raised over the cohesion of Mauricio Pochettino's players and the Argentines ability to direct the club after a ​3-0 defeat to Brighton, who picked up only their second win of the season.

Neal Maupay scored Brighton's bizarre opener after only 150 seconds, capitalising on Lloris' blunder before the Frenchman dislocated his elbow.

As quoted by ​The Mirror after the game, Maupay revealed how he and his Brighton teammates sensed blood in the clash with Spurs.

“We sensed their heads went down after the first goal – that’s why we kept pushing and ­putting pressure on them." Brighton manager Graham Potter's also added that his side's aggressive game plan worked perfectly, with the Seagulls boss stating: "We wanted to try and press their back four.

“I started with Connolly to be positive and to ask questions of their back line, to test the space behind and really challenge their centre-backs.”

With Spurs now sitting ninth in the Premier League with only 11 points from their opening eight games, the Lilywhites will be hoping for a drastic turn of form as they face Watford at home after the conclusion of the international break.