​Tottenham Hotspur have revealed a list of former players that will return to play for the club in a legends match to mark the opening of the club's new stadium, with Paul Gascoigne a notable absentee.

The likes of Robbie Keane, Dimitar Berbatov and Jurgen Klinsmann are among the names set to take part in the Spurs Legends vs Inter Forever 'test event' match at the new stadium on 30 March.

Club legend Gascoigne has seemingly not been invited. However, the former midfielder took to Twitter to insist that he is fit 'up for' making an appearance at the Tottenham Hotspur Stadium.

Not sure but I spoke2my manager shane Whitfield&said y am I getting all these tweets about a LEGENDS game at spurs new stadium a week come Saturday樂he said he’s not sure樂oh an hr ago I got a ball out lit up a floodlit pitch&if there’s a game at spurs im up 4 it ❤️from GAZZAx pic.twitter.com/8KR2EluMFi

Gascoigne - who played for the ​Lilywhites for four years - posted on Twitter: "Not sure but I spoke2my manager shane Whitfield &said y am I getting all these tweets about a LEGENDS game at spurs new stadium a week come Saturday

"he said he’s not sure

oh an hr ago I got a ball out lit up a floodlit pitch&if there’s a game at spurs im up 4 it."

The former England international made 92 appearances at Spurs during his time at White Hart Lane, scoring 19 goals, in a stint which saw him become a club icon, playing a key part in the Tottenham side which won the 1991 FA Cup. 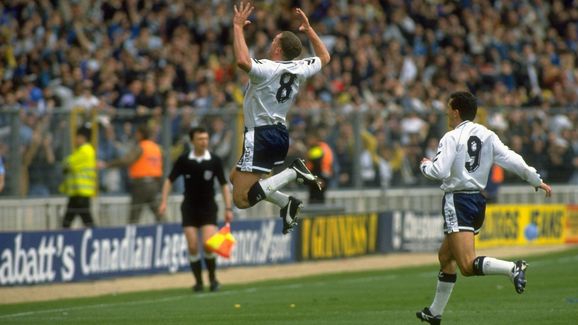 The 51-year-old is also fondly remembered by the Spurs' fans for his memorable free kick against ​Arsenal in the semi-final during their successful cup run in a 3-1 victory.

Whilst Gascoigne has not made the list of legends appearing for the match on 30 March, Tottenham have released the names of former players who will take to the pitch of their new stadium against the ​Nerazzurri.

As reported on the ​club's official website, Spurs icons such as Keane, Berbatov and Klinsmann will be joined by the likes of Nayim and Micky Hazard to play before an expected 45,000 crowd. The legends game will form one of the club's necessary test events needed to secure safety certificates at their new 62,000 capacity stadium, ​Crystal Palace