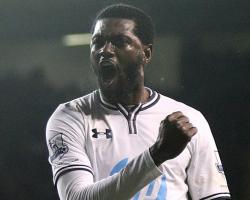 Hostilities resume between the two biggest clubs in north London on Saturday as Tottenham travel to the Emirates Stadium for the most mouth-watering FA Cup third-round tie.

No detailed explanation is needed to explain as to why this tie is so important for both teams.

Tottenham hate Arsenal. Arsenal hate Tottenham. It is as simple as that.

But this match has an added sub-plot provided by Adebayor - the Spurs striker who spent three and a half years on the books of the club's biggest rivals.

There had been doubts about whether Adebayor would be able to play after he was carried off on a stretcher in the second half of Tottenham's 2-1 win at Manchester United, but he has battled his way back to fitness.

"It didn't look great when he came off on that stretcher (at Old Trafford) but he is a warrior," Tottenham manager Tim Sherwood said.

"He was in real pain. He couldn't walk after the United game and he was getting cramped up everywhere, so for him to put himself in the frame for another huge game is a real credit to him.

"There is no holding him back at the moment."

Although Tottenham are without six first-team players through injury, Adebayor's availability gives Sherwood an attacking option which he thinks will send shivers down the spine of opposite number Arsene Wenger and his squad.

"When the team-sheet comes there are certain players you scan for straight away to see if they're playing," Sherwood said.

"I did it at Old Trafford to see if Wayne Rooney was playing and I'm sure Arsenal will be doing the same with Adebayor.

"When Arsene Wenger, the Arsenal players and their fans saw him come off at Old Trafford, I'm sure they were pleased. But unfortunately he's going to be walking out against them on Saturday."

Adebayor's form since he returned to the first team will fill Spurs fans with confidence, but they also know their star man has a history of indiscipline when he comes up against his old club.

Two months after leaving for Manchester City in 2009, Adebayor incensed Arsenal by running the length of the pitch at the Etihad to celebrate in front of their fans.

The 29-year-old then made a reckless challenge on Santi Cazorla in last season's game at the Emirates and was duly sent off with just 18 minutes gone.

Sherwood knows how heated north London derbies can get. In 1999 when he scored the winner against Arsenal for Spurs, David Elleray dished out 11 cards and sent off two Gunners players.

On a dramatic day at White Hart Lane there were punch-ups, accusations of coin-throwing from the terraces and Wenger claimed Sherwood elbowed Emmanuel Petit in the head.

Indiscipline cost Arsenal that day as Spurs ran out 2-1 winners and Sherwood hopes Adebayor will not plunge his team into the same kind of trouble this weekend.

"Adebayor is cleverer than people think," the 44-year-old said.

"He realises and he learns from his mistakes."