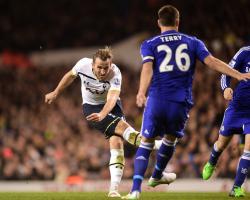 Spurs have rarely had the bragging rights in this fixture - just three times in 45 Premier League encounters, in fact - but this was a night those inside White Hart Lane will not forget in a hurry.

This was the first time the Blues had conceded even four goals in one match under Jose Mourinho and a defeat so heavy that Manchester City joined them on goal difference at the top of the table.

It was a result few could have predicted, especially when Diego Costa tapped home from close range after 18 minutes.

Spurs rallied wonderfully, though, and went in at half-time boasting a 3-1 lead as Kane levelled with a fine effort from 25 yards, before Rose netted and Townsend struck from the spot.

Kane won that penalty and added a classy second goal shortly after half-time - his sixth in as many matches - with Chadli adding a fifth after Eden Hazard had pulled one back for the visitors.

John Terry's late goal led to a nervy ending but Spurs would not be prevented from a famous end to a winless run of 10 matches in league and cup against Chelsea, which stretched back to April 2010.

This was a third match in seven days for both sides, whose managers plumped for three alterations apiece in north London.

Ryan Mason was one of those to have featured throughout the festive period, although lasted less than 11 minutes of this match.

The 23-year-old went to deck with what appeared a hamstring complaint after stretching for the ball, leading to Mousa Dembele's early introduction, swelling the number of Belgians on the field to five.

Chadli forced compatriot Thibaut Courtois into action with an overhead kick, shortly before another of the contingent acted as the catalyst to an 18th-minute opener.

Hazard showed wonderful skill to wriggle free and strike across Hugo Lloris' goal - an effort which came back off the post, only for Oscar to strike a cross-shot which Costa directed home from close range.

Angry claims of offside were rejected by referee Phil Dowd and the tension inside White Hart Lane had gone up a notch.

Federico Fazio did well to stop pantomime villain Costa, whose squared ball to Oscar was met by a block which appeared to hit Jan Vertonghen's hand.

There was to be no penalty, though, and Kane capitalised on the half-hour mark.

Showing impressive strength, skill and confidence, Kane cut in from the left and brushed aside Oscar to fire a low, 25-yard strike past Courtois.

It was a fine goal and started a remarkable Spurs comeback.

Christian Eriksen darted forwards to put through Chadli and the winger's strike managed to beat Courtois but came back off the far post, where Rose bravely tucked home the rebound while being flattened by Gary Cahill.

The normally reliable Cahill clumsily fouled Kane, allowing Townsend to fire home the resulting penalty with the final kick of the first half.

Hazard attempted to pull one back when play resumed, only for the deficit to increase seven minutes into the second half.

Chadli was continuing to prove a nuisance down the left and squared the ball to Kane, who brilliantly spun Nemanja Matic and struck past Courtois.

This was shaping up to be a famous win for Spurs but, never ones to do things the easy way, they let the visitors pull one back.

Hazard robbed possession off the dawdling Fazio and dashed forwards, collecting a one-two off Cesc Fabregas before beating Lloris.

Chelsea had the bit between the teeth now and Mourinho was incandescent when officials rejected penalty appeals when Hazard went down under pressure from Fazio.

Lloris produced a wonderful save to deny Cesar Azpilicueta soon after but things were only to get worse for the Blues, with Chadli the latest to get on the scoresheet by cutting inside before firing home Spurs' fifth.

Ramires and Hazard had efforts to score for Chelsea before Terry eventually did and, while Fabregas hit the post in stoppage time, they were not to add any more.