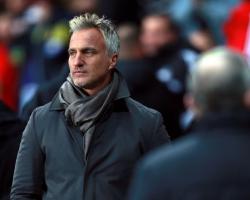 The 47-year-old Frenchman will challenge incumbent Sepp Blatter for the top job in world football, with the 78-year-old Swiss - who has been in office since 1998 - having indicated he will seek a fifth term.

Earlier this month Prince Ali Bin Al Hussein of Jordan, a member of FIFA's executive committee and a vice-president of the world governing body, announced he would stand against Blatter at the FIFA Congress in May

It is unclear whether Ginola, who first moved to the Premier League with Newcastle from Paris St Germain in 1995 and played in England for a further seven years, will fulfil the criteria as a FIFA candidate

He will need the backing of at least five national associations and will have to demonstrate active involvement in football administration for at least two of the last five years.

His bid has the backing of pressure group ChangeFIFA, which has long campaigned for new leadership at the top of an organisation that has faced numerous allegations of corruption

The bid is also supported by bookmaker Paddy Power.

Ginola said in a video posted on the teamginola.com website: "I'm standing because like you, I love football.

"Whether you are on the terraces or on the pitch we all know that the FIFA system isn't working.

"The game needs to change, but I can't change it on my own

I need you to stand up and change it with me

I need you in my team.

"By joining Team Ginola you are saying 'yes' to a FIFA built on democracy, transparency and equality

You are saying 'yes' to a FIFA which cares about one thing - football."

Ginola did campaign for England's unsuccessful bid for the 2018 World Cup in 2010 which attracted only two votes.

FIFA's eligibility rules on standing for FIFA president state: ''The candidate shall have played an active role in association football (as a board member, committee member, referee and assistant referee, coach, trainer and any other person responsible for technical, medical or administrative matters in FIFA, a confederation, association, league or club or as a player) for two of the last five years before being proposed as a candidate.

''The candidate shall present declarations of support from at least five member associations.''

FIFA has faced corruption claims surrounding the bidding for the 2018 and 2022 World Cups.

He quit last month as FIFA's ethics investigator after losing his appeal challenging the findings to clear Russia and Qatar to host the competitions.

FIFA's executive committee later agreed unanimously to an ''appropriate'' form of the Garcia report being published but with names and other details removed.

However, it was stated that no publication would take place until ethics committee charges against three FIFA ExCo members - Angel Villar Llona of Spain, Belgium's Michel D'Hooghe and Thailand's Worawi Makudi - have been dealt with.

FIFA also faced scandal before the last presidential election in 2011

Blatter's chief rival for office, Mohamed Bin Hammam of Qatar, was banned from all football activity for life in 2012 for attempting to bribe Caribbean delegates.