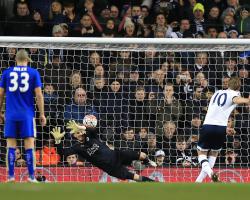 The Foxes had looked on course to continue their marvellous season with another impressive victory before Kane hammered home his 14th goal of the season to seal a 2-2 draw after Nathan Dyer was penalised for handball with a little over a minute remaining.

Christian Eriksen had given the hosts an early lead but Marcin Wasilewski headed Leicester level before substitute Shinji Okazaki's early second-half goal looked to have settled the tie in favour of Claudio Ranieri's men.

But Pochettino threw on Kane with 22 minutes remaining as the contest ended in a draw, meaning by the time January is out the two sides will have met on three occasions.

Between them the teams made 15 changes from their previous Barclays Premier League matches and a similar number of alterations is likely when the Foxes return to Spurs on Wednesday evening for a top-four clash.

They will then do battle at the King Power Stadium for a place in round four of the FA Cup as this repeat of the 1961 final could not separate the sides.

Tottenham opened the scoring with their first meaningful attack of the game as Josh Onomah fed the onrushing Nacer Chadli, whose shot took a deflection and was punched away by Foxes goalkeeeper Kasper Schmeichel.

Unfortunately for the Denmark international, the ball landed straight at the feet of Eriksen and he made no mistake in guidng the ball back past his compatriot and into the bottom corner.

The hosts then enjoyed a spell of dominance but, other than an Eriksen free-kick hit straight at Schmeichel, they did not fashion another chance.

Wasilewski was booked for a foul on Danny Rose which led to that Eriksen set-piece but the Poland defender, playing just his fifth game of the campaign, headed Leicester level as he lost Toby Alderweireld to power Demarai Gray's corner past Michel Vorm.

The fact Wasilewski's header was the first touch by a Leicester player in the Tottenham penalty area told the story of the opening half an hour and there was little in the way of the chances as the first half petered out well before referee Bobby Madley blew the half-time whistle.

Ranieri decided to introduce Okazaki at the break to give his side more attacking options and his decision was vindicated a little over two minutes later.

The Japan international collected the ball and eased through a couple of Tottenham challenges before hitting a shot straight at Vorm, only for the rebound to fall to him to slot away his fourth of the season.

Pochettino decided to call upon Nabil Bentaleb and top goalscorer Kane with time evaporating and it was the former who stung the palms of Schmeichel with a rasping effort with just five minutes remaining.