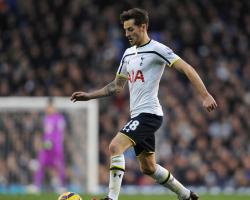 A product of the Spurs academy, the 23-year-old midfielder made his debut for the club in November 2008 as a late substitute at NEC Nijmegen in the UEFA Cup.

Mason spent time on loan at five other clubs before belatedly making his first league appearance for Spurs nigh on six years after his debut, but is now a key player for Mauricio Pochettino.

The midfielder has made 18 first-team appearances so far this term and has been rewarded for his fine form with a contract until 2020.

"I'm delighted and I can't wait to crack on now.

"I appreciate the length of the contract shows a lot of faith in me and hopefully I can keep progressing and stay at the club longer than the contract.

"I've worked hard, a lot of work over the years has gone into what has happened this season and this time I've a manager who has faith in me and stuck me in.

"It's been a long road but I'm delighted to be in the side and hopefully I'll stay in there as long as I possibly can.

"I can't stress enough the faith the gaffer has put in me and hopefully I can carry on repaying him and continue to put in good performances for this club."

The midfielder is one of several academy graduates in the Spurs first team right now, such as Harry Kane, Andros Townsend and Nabil Bentaleb.

Mason started alongside those three players in the memorable New Year's Day annihilation of Chelsea - a match he limped out of with a hamstring complaint, sidelining him until Wednesday's Capital One Cup semi-final.

Townsend's second-half penalty secured Spurs a 1-0 lead heading into the second leg against Sheffield United and Mason believes the future is bright.

"We're doing well and it's exciting," he said.

"We've a lot of games coming up, we're utilising the squad and hopefully we'll get to Wembley for the fans and continue to do well in the Premier League."