Mauricio Pochettino- Next 10 games are vital 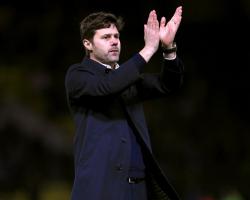 Spurs sit fourth at the halfway stage and just four points behind leaders Arsenal, having lost only twice in the league so far.

Pochettino's side can close that gap with a win at Everton on Sunday but the Argentine insists the next 10 matches will be pivotal in the race at the top.

In that time, Tottenham play Leicester and Arsenal at home as well as facing trips to Crystal Palace, Manchester City and West Ham.

"We need to arrive in the last 10 games with the possibility to fight for the objectives," Pochettino said.

"The next nine, 10 games will maybe mark the possibility of how we can finish in the table."

Arsenal and Manchester City remain favourites to be crowned champions in May but Tottenham's form - they are chasing their fourth consecutive win this weekend - has led many to suggest they can mount a sustained challenge.

For all the hype, however, Pochettino is adamant his players are keeping their feet firmly on the ground.

"The good thing is we don't speak too much but we work very hard and I think it is most important how we behave inside," Pochettino said.

"We are very quiet

We believe in ourselves

We are very confident and in football a lot can happen

"The only way we cannot achieve all that we can in football is if we stop working hard."

Tottenham currently boast the best defence in the league and central to that success has been the form of Eric Dier.

Dier spent 18 months on loan at Everton as a teenager but only played for the club's youth teams, before returning to Sporting Lisbon and moving to Spurs in August 2014.

"We are very pleased because he has started to play in a position that was his real position," Pochettino said.

"When we decided he should start to play as a holding midfielder it's because we saw he had the qualities to play in that position.

"He got into the national team as a holding midfielder

Maybe in the future his best position is centre midfield or maybe it's centre defence or full-back.

"But he is very young and very comfortable in the position he is playing.

"If we analyse him, today he is one of the best holding midfielders in the Premier League."

Dier has formed a rock-solid base in front of centre-backs Jan Vertonghen and Toby Alderweireld, and on Sunday the trio will be tasked with stopping Everton's Romelu Lukaku, who has 11 goals in his last 10 matches.

Alderweireld has been one of Tottenham's star performers so far this season and Pochettino paid tribute to the Belgian's impact on the team.

"I think it's obvious Alderweireld after 19 games is one of the best defenders," Pochettino said.

"He does a very good performance and shows maturity and experience

Great boy, great man and we are very happy him.

"I think they (Alderweireld and Vertonghen) are good partners

Our keeper is key as well.

"We need a very good balance

But it is true Toby has made a very good impact in the team."