Nacer Chadli bags a brace as Tottenham ease past Colchester 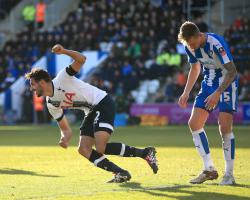 Chadli has now scored four goals in three games, while Eric Dier and Tom Carroll were also on target as Spurs won a fourth straight game.

Ben Davies' own goal was a mere consolation for League One's bottom club, whose chances were dealt a significant blow after a sickening clash of heads in the second minute.

Alex Wynter was treated by both medical teams before he was carried off on a stretcher and taken to hospital after colliding with team-mate Tom Eastman.

He had lost consciousness, but Colchester later reported he was sitting up in hospital, under observation.

Eastman left the field for treatment and returned with a head bandage, but was soon substituted

Questions may be raised on football's head injury protocols.

Harry Kane had immediately signalled for the game to be stopped, rather than try to capitalise on the defensive mix-up which led to the incident.

The lengthy delay and the two enforced substitutions of Colchester's centre-backs appeared to punctuate any sense of optimism for the hosts.

United's only three wins had come in the FA Cup since their last League One win on October 20.

Defeats of Wealdstone, Altrincham and Charlton had provided some respite from a 14-match winless sequence in the league, but Spurs were on form and swiftly on top.

Tottenham should have gone ahead when Kane played in Christian Eriksen, but he lifted the ball off target.

Moments later Chadli opened the scoring, firing in from the right after finding space.

Kane fired into the side-netting and had a header saved by Jake Kean soon afterwards.

It appeared to be only a matter of time before Kane scored, but he was next stopped in his tracks by substitute Frankie Kent, once of Arsenal.

Erik Lamela prodded wide in the opening skirmishes of the second half and then cut inside before shooting off target.

Another opportunity for Spurs' second came when Kane darted down the left and crossed for Chadli, who turned, had time to pick his spot, but fired left-footed against the bar.

The missed chances did not prove costly, though, as Dier's effort from long range doubled the advantage

The strike took a wicked deflection, which wrong-footed Kean.

Spurs boss Mauricio Pochettino was content enough to take off Kane, with Tuesday's Premier League clash at Norwich in mind.

There was a moment of alarm for Spurs as Colchester substitute Marvin Sordell surged through and beat Michel Vorm with a shot which hit the foot of a post and went clear.

United might have been within one, but soon Spurs were three ahead as Kieran Trippier's cross was headed in by Chadli.

Colchester got the goal their endeavours deserved when Gavin Massey's shot came back off the post and went in off Davies.

But Chadli turned provider soon after, crossing in for Carroll to tap in.