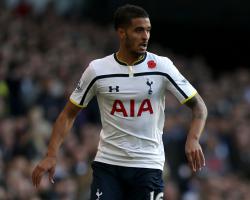 The former England Under-21 defender completed his move from north London to south Wales on Thursday evening for a fee understood to be ÃÂ£5million.

Naughton has penned a three-and-a-half year contract at the Liberty Stadium and could make his debut in Swansea's FA Cup fourth round tie at Blackburn on Saturday.

"I'm pleased it's all done because there has been talk since the summer over a potential move," Naughton told the official Swansea website

"My main aim is to start playing regular football again

I know it's going to be a tough challenge because there are some very good players here, but that's my goal.

"I've had quite a few loan moves over my career, but I actually played 34 games last season for Spurs, which is a fair amount.

"The main problem for me, however, was that I was still in and out of the team

"I'm sad to be leaving Spurs because it's a great club

I was there quite a while and the lads are a great bunch.

"But now I just want to settle into life at Swansea and try to play regularly.

"It all comes down to playing football - after all, that's my job.''

The 26-year-old joined Tottenham in 2009 after playing 40 games for his hometown club Sheffield United but went out on loan at Middlesbrough, Leicester and Norwich in his search for first-team football.

Naughton, who can play either right-back or left-back, made 74 appearances for Spurs and said he spoke to former team-mates and Swansea old boys Michel Vorm and Ben Davies about his new club.

"Ben had obviously been at the club the longest and he said it was a great place to play your football," said Naughton, who trained with the Swansea squad on Thursday morning before the formalities of his deal was completed.

"To be honest, as soon as I walked into the training ground I could see that for myself straight away."

"He's a good age for us and we look for players who want to prove a point and are hungry to do well.

"Kyle enjoyed his time at Tottenham but he didn't have the amount of games he wanted.

"But he will add quality with the other full-backs we've got and I'm looking for Kyle to push on and stake a claim for the starting XI."

Monk, meanwhile, said Bafetimbi Gomis remains committed to Swansea despite the French striker's comments last weekend that he could leave the club in January.

Gomis raised fresh doubts over his future when he gave an interview to French television station Canal Plus, the 12-times capped France international claiming Swansea had reneged on promises made to him about the game-time he would receive after joining from Lyon last summer.

"I've seen his comments and I've spoken to Bafe but it's nothing new, it's the way it is in football now.

He's not a young player who's up and coming, he has pedigree as he's a top performer who's performed his whole career.

"He's on the training ground with a smile on his face

He is very professional, gets on with his job and works hard.