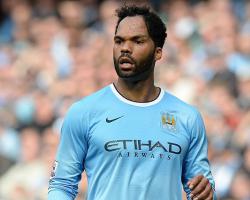 Lescott has been linked with a move away from Manchester City after falling down the pecking order at the Etihad Stadium.

Tottenham and Besiktas have been mentioned as possible destinations for the centre-back, who wants regular first-team football to aid his remote chances of making the England World Cup squad.

When asked about stories linking Lescott with Spurs, manager Sherwood said: "He is a good player, but there are a lot of good players at different clubs. He is at Manchester City at the moment so I can't comment on that."

Having spent Â£107million in the summer, Tottenham are unwilling to shell out big fees again in January.

The squad at Sherwood's disposal is already huge and he is also committed to giving the youth players he looked after in the development squad a chance.

It is for that reason that he has not met with chairman Daniel Levy and technical director Franco Baldini to discuss any potential moves in the current window.

It seems only a big player at a knock-down price will be of appeal to the north London club.

"I have not sat down and spoke to (Levy and Baldini)," Sherwood said.

"I don't think we need players. We need to get the ones we have fit.

"If there is anyone who springs up who could really make us better - our 11 - then possibly we will go in.

"The club have notoriously backed their managers and I don't think it will be different with me. I really think we will be fine once we have anyone fit."

There has been more talk of departures than arrivals at Spurs.

Erik Lamela has struggled to adapt to the pace of the Barclays Premier League since his Â£30million move from Roma, but Sherwood looks unlikely to allow him to leave for Atletico Madrid, who reportedly want the player on loan.

"He has not mentioned (going out on loan) to me," Sherwood said of Lamela, who is expected to miss Saturday's game at Arsenal because of a thigh injury.

"He just needs to settle like a lot of the (new signings do).

"He needs time for me to recognise what he can do, what he can produce and when I get the comfort in him then he will play, but he is injured at the moment."