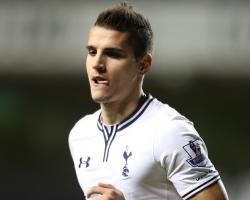 Spurs confirmed on Friday that Defoe had been sold to Toronto FC in a deal understood to be worth in excess of ?8million.

Defoe, who has scored 142 goals for Tottenham over his two spells at the club, will move to Canada at the end of February just before the start of the Major League Soccer season.

Lamela has also been linked with a move away from White Hart Lane in recent weeks. A loan move to Atletico Madrid has been mooted for the club-record signing, who has started just three Barclays Premier League games for Tottenham, but Sherwood will not let the 21-year-old leave.

"He won't be leaving on loan in this transfer window. He has a big future here, absolutely," the Tottenham manager said of the Argentina international.

"We know what a talented player Erik is. We also understand that players need time to settle.

"He needs time to acclimatise to this country. He doesn't speak English and he isn't used to the pace of the games, especially over the Christmas period when they come thick and fast.

"He is not 100 per cent fit either. He's still feeling fatigued in one of his thighs so we were very cautious with him.

"We are going to take it nice and steady with him. I really want to put him on the stage when he's ready to perform, rather than let people judge him when he's half-cocked."

Given that this is a World Cup year, the move is something of a gamble for Defoe, who has signed a three-and-a-half-year contract with Toronto.

The Canadian club, who are managed by Defoe's former team-mate Ryan Nelsen, have average gates of around 18,000 per home game.

Defoe has rarely featured for England in recent months, but Sherwood is sure the 31-year-old can still make it into Roy Hodgson's 23-man party for Brazil.

"Jermain has been immense. He is one of the best strikers this league has ever seen," Sherwood added.

"His scoring record for club and country is second to none and long may that continue. I see him still having a future for England in the World Cup in the summer.

"I think he would (still get in the squad). That instinct of scoring goals is never going to leave Jermain Defoe. He needs to wait until his legs have gone and they're far from gone at the moment."

Defoe has recovered from a hamstring problem in time for Saturday's London derby against Crystal Palace and he will be available for the following eight games.

Spurs have at least another 13 matches to play after Defoe departs, meaning Sherwood will be down to just two senior strikers in Emmanuel Adebayor and Roberto Soldado unless they can make additions this month.

The Londoners have been linked with a move for Juventus striker Mirko Vucinic in recent weeks, but Sherwood will see how his squad copes before making a decision regarding any new signings.

"We're always looking (at players) but (signing a striker) is not something which is pressing," the 44-year-old said.

"I think we've got enough goals from different positions in the squad. We have Soldado and Adebayor, who's in a rich vein of form at the moment.

"Nacer Chadli and Erik Lamela can play off the front. Gylfi Sigurdsson's got a good eye for a goal and a good scoring record. Harry Kane is another young boy who can come in.

"Unless something happened drastically to one of those boys in the meantime we may act, but we've not got any intention to do that now."

Sherwood tasted defeat for the first time since his appointment as full-time boss last weekend when Tottenham lost 2-0 at Arsenal in the FA Cup.

Ten first-team players were unavailable for the north London derby through injury, but Andros Townsend, Defoe and Sigurdsson are back for the Palace match.