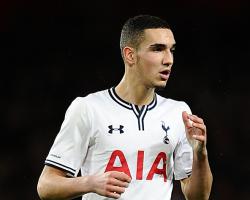 Sherwood took many by surprise when he handed Bentaleb his Tottenham debut last month, but the 19-year-old, who worked under the current Spurs boss when he was in charge of the development team, has hit the ground running and is now considered a first-team regular.

Bentaleb has been so impressive that he has been mentioned as a possible England player of the future even though he would not be eligible for the Three Lions for another three years as he was born across the English Channel.

Bentaleb joined Tottenham in 2012 after unsuccessful trials with Lille, where he was born, Dunkerque and Belgian side Mouscron.

The midfielder has represented France at under-19 level, though, and even though he barely speaks the language, Sherwood believes Les Bleus could come calling for the player in the run-up to the World Cup.

"If he carries on the way he is at the moment he'll be knocking at the door for the French World Cup squad," the Tottenham manager said.

"He's got to make a decision. I'm not sure how much love the French are showing him now.

"He's performing regularly and if the English are serious about it, it probably could be an arm wrestle between them and the French.

"I haven't had a close look at who the French have got (in that position), but Nabil is a good player."

The idea of a foreign-born player representing England does not sit well with some people.

That much was clear last summer when Jack Wilshere questioned the idea of Manchester United forward Adnan Januzaj donning the Three Lions.

"If you live in England for five years it doesn't make you English," the Arsenal midfielder said, sparking a debate over the FIFA rule which states a player must spend half a decade in a country before he is eligible to represent his adopted nation.

Even though Bentaleb was born in France, Sherwood does not think the midfielder would feel out of place in the England camp.

"He's blatantly French but to be fair, I only said to him recently in the development squad that I had never heard him speak French," the 44-year-old said.

"It's only in the last few weeks that I've heard him speak French for the first time. I called him on it because I had thought he was from Harlow (in Essex) or somewhere!"