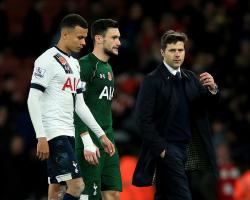 Spurs bossed the first half at Goodison Park in terms of possession and chances, yet found themselves trailing in the 22nd minute when their former player Aaron Lennon struck for the hosts in emphatic fashion.

Tottenham hit the woodwork either side of that, Harry Kane being denied by the post and Ben Davies by the bar, before Dele Alli notched a fine volley in first-half stoppage time to bring things level.

The game was more even after the break, with neither team able to seize the victory.

"The first half I think was fantastic, one of our best performances so far

In the second half we managed the game until around 75 minutes, when I think Everton increased their level.

"I think we need to feel proud, and our performance was really good - but we are disappointed with the final result."

Tottenham, now six points behind league leaders Arsenal in fourth place, were being talked up as possible title contenders in the build-up to the game.

And when asked afterwards how he saw his team's chances in that respect, Pochettino said: "It is too early to speak about some challenge or achievements at the end of the season.

"I think the way we are, all can happen.

"We believe in the way we play, we are very ambitious and the players are very disappointed in the changing room.

"Always at the end of the game we play some music but today we (did not, because we) are very disappointed, because the feeling is that we dropped two points.

"Maybe tomorrow we will analyse the game and say we need to be happy for the point, but today our feeling is we dropped two - and this is a very good sign for the future.

"We are the youngest squad in the Premier League but we are showing our winning mentality."

Pochettino admits the England international, signed from MK Dons last year, needs to be handled with care, but he can see no reason why Alli cannot continue to perform at the highest level for the rest of the campaign as Euro 2016 draws near.

"I think the goal was fantastic, a great goal," Pochettino said.

"From the beginning we have had to take care of him

We need to be careful

That is important when they are young, to handle them in a good way."

Then asked if he could see Alli continuing to perform at such a level in the team every week, Pochettino said: "Yes - if he shows that in every training session he deserves to play, why not?"

While Tottenham are three points clear of fifth-placed Manchester United, Everton are six points adrift of the Red Devils in 11th and struggling for results.

This one meant they have won only once in their last seven Premier League games, while their top-flight home record for the season so far shows just three victories.

It was, at least, an improvement on their last two efforts at home - a 3-2 loss to Leicester and 4-3 reverse against Stoke.

And Everton boss Roberto Martinez said: "I thought throughout the game we had a very, very good performance.

"We have been conceding goals cheaply at home and it was something we had to rectify.

"In the second half we were a bit more ourselves

We kept that defensive intensity, got on the ball more and in the last half-hour were one decision or one touch away from maybe getting a winning goal, and that is pleasing.

Today's performance showed we are ready to be stronger defensively."