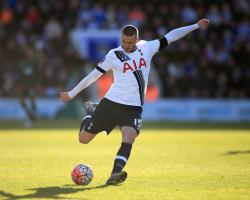 Mauricio Pochettino's men won 4-1 at Colchester on Saturday to advance to the FA Cup fifth round and extend their unbeaten away run to 10 games in all competitions ahead of Tuesday's trip to Norwich.

Spurs sit fourth in the Premier League, five points off the summit, and are still in the Europa League, with Dier declaring the young squad are thriving.

Dier told Spurs TV: "There's pressure for every game, but us being up there, fighting for everything, that's going to be added pressure.

"But I think the whole team is just really enjoying themselves at the moment.

"I don't think we play with pressure

We enjoy ourselves, we play freely

"I think that shows

We express ourselves and hopefully we can keep doing that."

Tottenham's most recent losses were to Newcastle and Leicester at White Hart Lane, defeats which Dier believes inspired them to improve.

"Home and away we're very confident at the moment," he said.

"We've had a couple of losses - Newcastle and Leicester at home - but overall those losses have helped us, because every time we've reacted and gone on a good run.

"Now it's up to us to keep up with this run home and away."

Nacer Chadli scored twice on his 100th Spurs appearance to take his tally to four goals in three games.

Dier and Tom Carroll were also on target in the win at League One bottom club Colchester.

"Maybe we were a bit sloppy at times, but overall I think we had the right attitude," Dier added.

"It's tough coming to these grounds, playing against these teams

These games, if you don't kill them off, can get a bit ugly

"We're happy we managed to come out comfortable winners."

The match was partly overshadowed by a sickening clash of heads between team-mates Alex Wynter and Tom Eastman in the second minute.

Wynter had to go to hospital after losing consciousness in the collision, but Colchester reported on Saturday night that results of a scan were normal.