Spurs through after comeback win 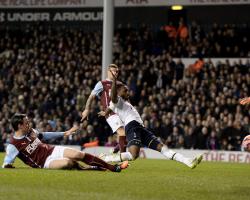 Paulinho hit back for Spurs in the 10th minute, before Etienne Capoue levelled on the stroke of half-time.

Vlad Chiriches and Danny Rose then struck after the break to secure Spurs a fourth-round home tie with Leicester.

Sam Vokes' strike secured Burnley a 1-1 draw at Turf Moor on January 5 to tee up this third-round replay, but the fit-again forward could not inspire anything nearing a repeat.

Spain hitman Soldado's latest drought stretched to five games as the Spurs striker fired against the bar from six yards with the goal at his mercy.

The one-time Real Madrid man's finishing jitters show no signs of abating, even though he provided two assists on the night.

The 29-year-old continues to graft away without whining, but his glaring miss only served to indicate just why 17-goal Harry Kane remains Spurs' first-choice striker.

The former Bolton striker sauntered through and flicked an arcing volley past the helpless Vorm to hand Burnley the third-minute lead.

Just four minutes later Burnley were two to the good, with Tottenham again the architects of their undoing.

The break-neck opening took another twist when Paulinho dragged Spurs back into the contest in the 10th minute.

Soldado was able to atone for his unwitting assist for Burnley's second goal by laying on Spurs' first.

The former Valencia hitman flicked Andros Townsend's cross perfectly into Paulinho's path, and the 32-cap Brazil midfielder obliged with a spin and a finish.

Burnley captain Michael Duff had to produce a sliding clearance to deny the lurking Soldado the chance to equalise, before Benjamin Stambouli fired over from 20 yards.

Stambouli then shot wide from the edge of the area as Spurs pressed again, while Trippier's headed clearance denied Danny Rose a strike on goal.

Townsend's low cross from a quickfire break had Tom Heaton beaten bar the tap-in, only for Soldado to miscue horribly.

Just when Spurs feared no more reward in the half however, up popped Capoue to level in time added on.

The France midfielder drove home from 18 yards after Paulinho had failed to connect with Ben Davies' cross.

Chiriches headed Spurs into the lead just four minutes into the second-half, the defender making no mistake at the far post as Heaton flapped at Townsend's corner.

Nacer Chadli injected extra pace off the bench as Spurs maintained control, while Soldado dragged a shot wide from 20 yards then had another effort easily saved by Heaton.