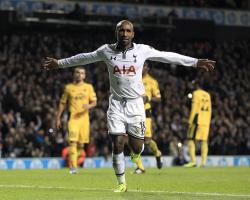 The Major League Soccer outfit are reportedly poised to sign the 31-year-old from Tottenham on Monday with the Toronto Sun claiming Defoe "will be unveiled as TFC's newest Designated Player".

Former Spurs defender Nelsen has coached the franchise since last February and, as a former team-mate of Defoe's, he knows exactly what the prolific striker could bring to his ambitious team.

The New Zealander is, however, concerned a leading Premier League club could swoop for the England international before any deal is ratified.

He told Sky Sports News: "I think if you ask any Premier League club then they would take Jermain right now.

"I know Tottenham are getting offers from everywhere for his services at the moment, from top-four clubs in England as well."

"There's a lot of things in the air, there's nothing been done yet, he's not our player at the moment."

Should Defoe head to Major League Soccer, he will do so following 15 and a half years in English football and nine with Tottenham, split across two spells which have yielded 142 goals.

That tally leaves him fifth among the club's all-time leading goalscorers.

"I know Jermain, I know his character and if we could get a player like Jermain then it would be absolutely incredible," Nelsen added.

"Obviously we're working really hard and all I can say is that if a player of the quality of Jermain Defoe ever graced the MLS it would be an amazing coup for the league."

Defoe has scored nine goals for Spurs this season, two in September 24's Premier League win over Aston Villa with the rest coming in the Europa League.

He has struggled to break into the starting line-up under coaches Andre Villas-Boas and his replacement Tim Sherwood, though, with Roberto Soldado and most recently Emmanuel Adebayor preferred.