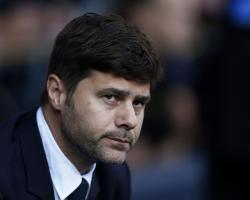 It means, in their previous three meetings this season, Tottenham have been unable to get the better of Claudio Ranieri's side, who remain second in the Barclays Premier League behind Arsenal.

"It is a good challenge as they play with a different team in FA Cup, 10 players different from in the Premier League," Pochettino said.

"They change all the team, only kept their goalkeeper and we lost

Now it's a good chance to try to show we are better than them and win the game.

"We are ready to compete tomorrow

We have a good chance to go to next round and the FA Cup is important for us."

Both sides are again likely to make several alterations to their starting line-ups when they meet at the King Power Stadium - but Pochettino insists that does not mean they are prioritising the Premier League over a cup run.

"We have some players in a condition where it's a big risk to play," he said.

"We have ahead of lot of games

It's a clear message for our fans - when you are Tottenham or Leicester we need to show respect for the squad."

Leicester could be forgiven for not prioritising the FA Cup as they find themselves embroiled in an unlikely Premier League title race, but Ranieri insists his side are focused on booking a fourth-round spot.

"Now we are focused on the cup," Ranieri said

We start very well and for me this is another good step for my ideas about football."