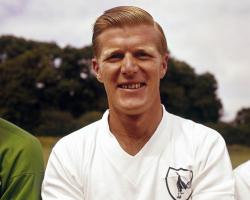 Right-back Baker was born in Hampstead, north London and joined Spurs in June 1949 and went on to make 342 appearances.

Baker was an integral part of Bill Nicholson's 1961 squad, which became the first team since Aston Villa in 1896-97 to win both the league title and FA Cup in the same season

After helping Spurs retain the FA Cup the following season and then win the 1963 European Cup Winners' Cup, Baker left White Hart Lane in the summer of 1965 when he emigrated to Durban in South Africa