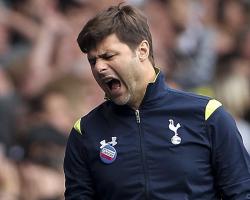 Tottenham Hotspur V Leicester - view commentary, squad, and statistics of the game live.Pochettino keen to end the boosMauricio Pochettino has urged Tottenham fans to stop booing Emmanuel Adebayor for the betterment of the team.After nine weeks out through injury, illness and family issues, the divisive frontman returned to action as a second-half substitute in last weekend's 2-1 win against Sunderland.Adebayor's comeback was not universally welcomed, though, as section of the White Hart Lane crowd jeered his introduction - a reaction he received once again when leaving the field in Wednesday's Capital One Cup semi-final against Sheffield United.That reception appears to be a fall-out from his comments in November suggesting Spurs would rather play away due to the pressure being put on them, compounding a perceived lack of interest from the highly-paid striker.However, Pochettino says the booing has to stop if Tottenham are to enjoy a successful campaign."I think this is the best because all players need to feel the support from the stands from our supporters," he said."I think it's better for him and for the team

We always need to create a great atmosphere to try to get success."Adebayor captained the side against the Blades and could do again when Leicester arrive in the FA Cup on Saturday, depending on whether Younes Kaboul or Hugo Lloris feature.Nacer Chadli remains absent on compassionate grounds for the fourth-round clash, although club-record signing Erik Lamela is back in the fold after a calf complaint.Leicester midfielders Esteban Cambiasso and Dean Hammond are back in contention.Cambiasso has missed the last three weeks with a hip injury whilst Hammond has been out for a fortnight with a calf problem, but both returned to training this week.Boss Nigel Pearson is without Matty James, who serves the second game of a three-match ban, goalkeeper Kasper Schmeichel and Matt Upson (both foot), while striker Chris Wood is doubtful with an ankle problem.Leicester boss Nigel Pearson is confident new record-signing Andrej Kramaric will hit the ground running following his recent arrival.Kramaric, a B#9million capture from Croatian side Rijeka, is poised to make his full debut in Saturday's FA Cup fourth-round clash at Spurs after joining the Foxes last Friday.The 23-year-old Croatia international had to wait eight days before finally being given international clearance and handed a work permit.Although Kramaric played the final 25 minutes of last Saturday's 1-0 home defeat to Stoke in the Barclays Premier League, he barely saw the ball as City struggled to make any impact.Pearson, though, has no doubt Kramaric - with 28 goals in 24 matches for Croatia and Rijeka prior to his move - will not be one of those overseas players who struggles to adapt to English football."I'm very satisfied with Andrej

We are delighted to have signed him, a player we had an interest in over a long period of time," remarked Pearson."It's been very impressive how he's dealt with his situation because it's never easy for a young man to be patient waiting for the political side of getting a deal done, with work permits etcetera."But he is settling very well, his English is excellent, so that's a great benefit for him in terms of being able to understand what's expected."The most important thing for him is that he's been able to settle in with his team-mates, and I'm sure he's enjoyed his experience so far."Clearly we would have liked his debut to have been a more positive experience, but I'm very confident he will have a real effect on the team's fortunes here on in, and that's the most important thing."He's an intelligent player, and I'm confident he can have a positive effect on us pretty quickly, but I'm also aware players need a bit of time."We'll try and make the transition for him as easy as possible, but ultimately we think he's good enough to do that as quick as he can."