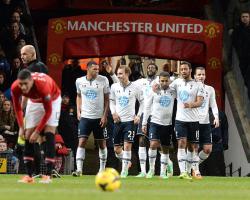 Danny Welbeck pulled one back for the hosts but despite a succession of penalty appeals and chances for Javier Hernandez, Wayne Rooney and Nemanja Vidic, a combination of goalkeeper Hugo Lloris, good fortune and some desperate Tottenham defending kept them at bay.

The result maintained Tim Sherwood's impressive start as Andre Villas-Boas' replacement, with three wins and a draw over the festive period taking them above their opponents.

For David Moyes though, the mini-revival has ground to a halt.

Not since 1989 have the defending champions lost on New Year's Day. It is 1986 since United were last beaten four times on home soil by the opening day of January.

These historical statistics obscure the more meaningful ones.

On a day when the biggest challengers for a top four place all won, United now find themselves 11 points behind league leaders Arsenal and five away from a Champions League place.

It is a pretty depressing position for a club so used to winning, with former manager Sir Alex Ferguson on hand in the directors' box to watch it all unfold.

With Rooney restored to Moyes' starting line-up after overcoming a groin injury, United began with the verve expected of a team boasting a six-match winning sequence.

United's best opening fell to Chris Smalling, who charged onto Antonio Valencia's return pass before crashing a shot which appeared to go through Hugo Lloris' legs, but actually cannoned wide off them.

Lloris combined with Michael Dawson to deny Welbeck. Slow motion replays suggested the potential for a penalty shout but at full speed, it was difficult to see how referee Howard Webb could do anything but wave play on.

But, despite their dominance of possession, other than a Vidic header that bounced wide of a post Tottenham had well covered anyway, that was it from the hosts.

From far less possession, the visitors did much more.

Aaron Lennon got on the end of Roberto Soldado's superb through-ball but fired against David de Gea when he really should have done much better.

Lennon also provided the cross which Soldado was inches away from reaching as he slid in at the far post.

And, of course, there was the goal.

Eriksen deserved a lot of credit for the excellent far-post cross. Adebayor's execution was perfect.

Yet the complete absence of a challenge from Smalling made the striker's task far easier. Rooney in particular looked somewhat frustrated.

Operating in a deep role behind Welbeck, the England forward followed up a physical battle for possession near the corner flag by grabbing Mousa Dembele by the arm to prevent a counter-attack.

A yellow card inevitably followed, which could easily have been matched by Welbeck just before the hour.

Moyes tried to inject some life into his team after the break by throwing on Hernandez and Shinji Kagawa.

In the process, he made a tactical reshuffle that resulted in Tottenham grabbing their second.

Valencia's deficiencies as a full-back have already been exposed this season and when Vidic half-blocked a low cross from Lennon, there they were in glaring evidence again.

The South American simply failed to react to the danger of a bouncing ball, allowed Eriksen to run straight across him and, from six yards, the Dane nodded in.

It seemed like game over but within 60 seconds the deficit had been halved as Welbeck finished brilliantly, dinking the ball over an advancing Lloris after Hernandez had supplied the through-ball.

Amid the frenzy, Adebayor picked up an injury serious enough for him to be carried off, which delayed the restart without taking the edge off United's hunger for an equaliser.

In United's desperation to attack, Lennon almost sealed it for the visitors but once again De Gea came to the rescue.

Rooney and Vidic came close as the hosts reasserted themselves but Tottenham had done enough, and Moyes was left to experience that familiar losing feeling.