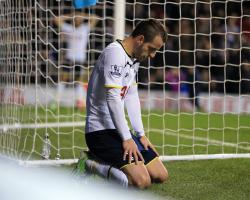 Townsend believes the luckless Spain striker "just needs the service and the game time" and "the goals will start flowing".

The ÃÂ£26million striker hit the bar from point-blank range after a fine cross from England winger Townsend, with his latest goal drought reaching five games.

"I have been in that position before, when nothing will go in for you," said Townsend.

"He played well last night but he is a striker and he wanted that goal.

"I just ran over to him to keep his spirits up, and five minutes into the second half he put an assist on for Danny (Rose) so it's great for him and I think everyone's pleased for him.

"I just said 'keep going, I will try and put another cross in for you, so keep getting in the right positions and you will get your goal'.

Robbie is a fantastic character

He picked himself up, dusted himself down and put a great ball in for Danny in the second half.

"We have seen in Spain that he is fantastic striker

He just needs the service and the game time

I am sure that once he gets one or two, the goals will start flowing."

Soldado was handed the chance to impress against Burnley with first-choice striker Harry Kane handed a rest.

The 29-year-old claimed two assists in a solid performance in all aspects save, once again, for finishing.

Spurs slipped 2-0 down to early goals from Marvin Sordell and Ross Wallace, but hit back to level terms at half-time thanks to strikes from Paulinho and Etienne Capoue.

Vlad Chiriches and Rose then completed the turnaround after the break as Spurs set up a fourth-round clash with Leicester at White Hart Lane on Saturday week.

"It was great work from Robbie Soldado with the assist and I was lucky to get on the end of it to round off a positive comeback," Rose told Tottenham's official club website.

"We've bounced back to winning ways and we're delighted that we're in the next round.

"We showed great character to come back."