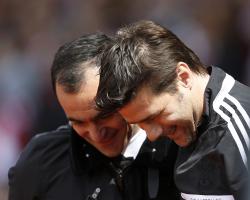 The Mauricio Pochettino revolution has yet to fulfil expectations at a club symptomatic with style, with four defeats from six league games on home turf ratcheting up the pressure further.

It was a miserable record which looked set to be extended when Kevin Mirallas curled home early on, yet Spurs responded impressively to eke out a narrow win thanks to efforts from Christian Eriksen and Soldado.

This was one of the best performances of the Pochettino era and sets Spurs up nicely for Wednesday's trip to rivals Chelsea, a game their match-winner will approach with the weight of his shoulders.

Having seen Eriksen level six minutes after Mirallas' early strike, Soldado put the hosts on course for victory on the stroke of half-time - the B#26million striker's first goal in 593 minutes.

It was a goal met by wild celebrations by all those connected to Tottenham and proved the difference as Everton's eight-match unbeaten run in all competitions came to an end, with Roberto Martinez's men irked to see a late penalty appeal against Federico Fazio rejected.

Both sides came into this match fresh from securing progress to the Europa League knockout stages on Thursday.

There were a string of changes and one of those, Ross Barkley soon showed his quality to wriggle free, with the ball falling kindly for Romelu Lukaku to test Hugo Lloris from close range.

Everton were looking the brighter side in the early stages and Tottenham's well-documented Europa League hangover looked set to hit again.

Mirallas, guilty of a wild early effort, showed more poise with his next, controlling the ball impressively and turning past Soldado, before curling an exquisite strike into the top corner from the edge of the box.

Pochettino was infuriated by the sixth goal conceded inside the opening 15 minutes this season and was further frustrated when Vlad Chiriches almost gifted Everton a second with a weak back pass.

The frustration inside White Hart Lane was audible, but the emotion of the majority here soon turned to elation.

Harry Kane, so impressive this season, struck a fizzing, low drive which Tim Howard could only parry to Eriksen, who intelligently clipped home the rebound from an acute angle.

Buoyed by that 21st-minute leveller Spurs attacked in numbers, with Ryan Mason having an effort from distance before Kane attempted to score with an audacious 20-yard chip and then rolled a tame effort straight at Howard.

Eriksen would have had his second of the afternoon was it not for a narrow deflection taking his effort from the edge of the box just wide.

Seamus Coleman had an effort saved at the other end on a rare voyage forwards by the visitors, who were almost caught out immediately afterwards when Soldado tried to latch onto an undercooked Muhamed Besic header.

Everton got away with that one and looked set to go in level at the break until Soldado ended a goal drought which stretched back to September.

Slid through by Aaron Lennon, the Spaniard took a touch and produced an assured finish that beat Howard and sent White Hart Lane into remarkable celebrations.

The crowd chanted Soldado's name right through until he walked down the tunnel for half-time, from which he returned strongly.

Coleman did well to get back and thwart the striker before he soon flicked a header wide, with Kane then forcing Howard into action.

Fazio almost turned in a dangerous ball from Eriksen and Mason flashed a fierce drive just over - missed chances Everton looked to punish in a dominant last 20 minutes.

The best effort came from Coleman, with only a wonderful save from Lloris denying him after being slipped through impressively by Barkley.

Lukaku hit wide as Everton continued to push on, with the Belgium international angered after his header came off Fazio's arm late on.Besic was fortunate not to give away a spot-kick at the other end for bringing down Kane as an entertaining clash came to an end