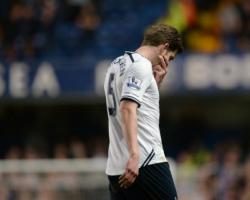 Gunners claim vital derby winArsenal completed a smash-and-grab raid to win the north London derby 1-0 and drag themselves back into the Barclays Premier League title race.A thunderbolt from Tomas Rosicky after just 72 seconds proved enough for the Gunners to earn a first victory over Tottenham at White Hart Lane since September 2007.Tim Sherwood's hosts should have taken something from the match after they dominated possession for long spells and saw midfielder Nacer Chadli spurn a glorious chance to equalise following a mistake by Arsenal goalkeeper Wojciech Szczesny.But the hosts survived and Arsenal boss Arsene Wenger will now take his side to Chelsea for his 1,000th match next weekend only four points off the leaders and with a game in hand

Spurs, though, are all but out the race for the top four, now seven points behind Manchester City.Arsenal were ahead inside two minutes with a goal of the highest order.Alex Oxlade-Chamberlain pushed the ball out to Rosicky on the right, and he returned a pass back to the England man

The ball then broke again off Oxlade-Chamberlain into the path of the Czech playmaker who fired a fizzing angled drive past Hugo Lloris into the top-left corner.Sherwood's side - whose collective character has been questioned by the manager in recent weeks - soon regrouped and caused Arsenal a few problems with probing balls into the penalty area.Arsenal, though, retained possession well and it should have been 2-0 on 15 minutes when Oxlade-Chamberlain robbed Nabil Bentaleb on the halfway line and sprinted clear.Oxlade-Chamberlain, so impressive in the midweek Champions League draw at Bayern Munich, darted to the edge of the penalty area, but as Lloris came off his line the Arsenal man screwed his attempted chip horribly wide - with Lukas Podolski screaming for a square pass for what would have been a tap-in.That let-off gave a huge lift to the home side, who immediately went on the offensive with a low cross from Andros Townsend on the right flying through the six-yard box.On 21 minutes, Arsenal full-back Bacary Sagna slid into a challenge with Danny Rose which - although he probably touched the ball first - totally upended the Spurs defender

Sherwood was off the bench demanding a red card but after a stern talking-to referee Mike Dean produced only a yellow.Spurs continued to play a very high defensive line, which was breached again when Podolski raced clear down the left

His cut-back was just behind Rosicky but Oxlade-Chamberlain connected with a strike that was deflected out for a corner.The home side should have been level at the start of the second half following two terrible handling errors from Szczesny

First the Pole flapped at a cross on the edge of the Arsenal penalty area, which Sagna hacked away as Chadli chased the loose ball

Then, inexplicably, Szczesny failed to collect a high cross into the box, which this time did fall for Chadli, but somehow Laurent Koscielny blocked his goalbound shot at point-blank range.With 20 minutes left, there was a double change for the home side when Paulinho and Gylfi Sigurdsson replaced Chadli and Sandro.For Arsenal, Rosicky was taken off as defensive midfielder Mathieu Flamini came on.Wenger was off his seat and protesting for what he felt was a penalty after Koscielny was sent tumbling by Jan Vertonghen, but the referee was not interested.Lloris then made a smart reaction save after Mertesacker lashed the ball goalwards from a deep free-kick.Tempers boiled over in the closing minutes as Sherwood twice hurled the ball at Sagna when Arsenal had been awarded a throw-in.Arsenal midfielder Mikel Arteta was less than impressed and eventually it needed Wenger to move in and act as peacemaker in a crowded technical area as his side played out the four minutes of stoppage time without further incident