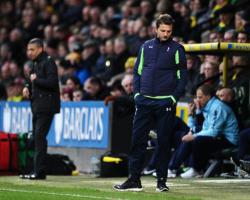 Rare Soldado goal downs BluebirdsRoberto Soldado's first goal in nine games fired Tottenham to a 1-0 Barclays Premier League victory over struggling Cardiff at White Hart Lane.The under-fire 28-year-old ended his two-month drought with a cool first-half finish as Spurs edged past Ole Gunnar Solskjaer's relegation-threatened Cardiff.Soldado's relief was palpable as the B#26million Valencia capture notched just his sixth goal in 29 Tottenham appearances.Tim Sherwood's Spurs consolidated fifth place in the Premier League table with their third win in four league games.Cardiff's seventh consecutive Premier League defeat on the road leaves them one point and one place off the bottom of the table.Spurs struggled for control throughout the clash, holding midfield duo Paulinho and Mousa Dembele too often too deep and generally unconvincing.Soldado's evident goal-shyness wracked the opening exchanges, the Spain striker wrestling unsuccessfully with two half-chances in three minutes.Spurs twice sent Aaron Lennon in behind the Cardiff defence, with the England winger delivering accurate crosses both times.First Soldado was unlucky not to direct his near-post header closer to the target but on the second Lennon cross he just overran the ball, failing to add any power as he nodded tamely at Cardiff keeper David Marshall.Craig Bellamy caught Andros Townsend in possession to race clear and send Fabio tearing into the Spurs box

As the Brazilian pulled the trigger though, Spurs skipper Michael Dawson produced a timely block.Livewire Cardiff striker Bellamy was then booked for dissent after Dawson cut out a threatening ball that would have set him clear on goal.Tottenham's aerial chances kept coming, with Dawson heading straight at Marshall after Kyle Naughton's well-worked free kick.Dawson hacked a long-range shot well wide before glancing a near-post header wide of the static Marshall's far post after a pinpoint Naughton corner.Tottenham ended a slight lull with a devastating counter-attack, Hugo Lloris punching clear Declan John's free-kick

Townsend raced into the Cardiff half, fed Emmanuel Adebayor drifting out to the left, and the Togo striker laid on the perfect ball for Soldado.All those goal troubles drifted away as the former Valencia poacher's instincts rushed back, Soldado expertly touching home to hand Tottenham a deserved lead.Former Spurs defender Steven Caulker then wasted a gilt-edged chance to level, the Cardiff captain heading Bellamy's corner against the bar from point-blank range.Lloris then had to stretch high to parry John's left-flank blast, before flicking the ball clear with his boot.Agitated Spurs boss Sherwood screamed at his midfield to stop drifting so deep; no doubt continuing the rant at half-time, with Spurs leading 1-0 but failing to convince.Cardiff seized the second-half initiative, Bellamy's shot blocked and Dawson rebuffing a Fraizer Campbell cross.Lennon flew clear in a bid to wrestle control, only for Ben Turner to intervene just as space opened for a shot.John felled Lennon from behind on Spurs' right flank, on the cusp of the penalty area

Cardiff's left-back received a yellow card but was mightily fortunate not to concede a penalty.Townsend hit the target from the free-kick, but never really troubled Marshall.Fabio worked Gary Medel free in the box for Cardiff, but the Chilean's feeble effort was no issue for Lloris.Cardiff sent Kenwyne Jones into action to cause mayhem in the Tottenham defence, but the powerful striker could not find a team-mate with his only notable contribution, a knock-down in the box.Adebayor had the chance to tee up Lennon for a clear scoring chance late on, only to miscue the pass