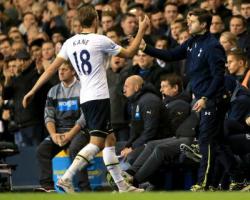 Tottenham Hotspur 2-1 Burnley: Match Report - view commentary, squad, and statistics of the game as it happened.Lamela wins it for SpursErik Lamela broke his 25-game Barclays Premier League goal drought to seal Tottenham's 2-1 victory over Burnley at White Hart Lane.The Argentina winger fired home from 25 yards to atone for gifting Burnley the platform for Ashley Barnes' equaliser.Harry Kane headed Tottenham into the lead before Barnes levelled, George Boyd latching onto Lamela's misplaced pass in the build-up.Lamela shook off that error to dart in from the right flank, tee himself up and convert a long-range blast to end his dismal run without a league goal in north London.The 22-year-old has struggled to justify his B#27million price tag since joining Spurs from Roma in August 2013, but finally broke his league duck as Mauricio Pochettino's side secured their third successive win.Barnes' 20-yard blast was every bit as smartly-taken as Lamela's impressive strike, the Burnley forward claiming his second goal in as many matches.Sean Dyche's side were unable to offer any response after Tottenham regained the lead however, with the hosts bossing the goalless second half.Burnley's defeat dropped them into the relegation zone, after QPR saw off West Brom 3-2.Tottenham's quicker thinking caught the Clarets cold for the game's opening goal, Kane starting and finishing a smart move.The Spurs striker pounced on Kieran Trippier's handball to slide a quick free-kick into the onrushing Nacer Chadli, who fired a left-wing cross straight back to Kane

The Enfield-born hitman flicked his calm header home for a goal that sparked the game to immediate life.Dyche was left remonstrating with officials, complaining of a potential offside against Christian Eriksen from Kane's free-kick.Spurs's Denmark midfielder was canny enough not to chase the ball to Chadli however, ensuring the hosts' first real attacking move bore fruit.Just when Spurs were winding up to wrestle full control however, Burnley struck back.Lamela lost possession cheaply in midfield, Boyd found Barnes - and the visiting midfielder blasted a fine long-range strike past goalkeeper Hugo Lloris.Kane then fluffed a tap-in as Spurs pressed again, hacking at fresh air when it would have been easier to double his day's goal tally.Lamela's mazy run and low cross teed up Kane's staggering miss, before Eriksen fired the loose ball over the bar.Jason Shackell nodded wide from a smart far-post corner a Burnley kept battling, but Spurs struck next to take a 2-1 lead into the break.Lamela cut in off the right wing, picked his spot and fired home from 20 yards, atoning for the error that had allowed Burnley to level.Danny Ings caught Federico Fazio on the run after a smart through-ball before firing in on goal when the second half hit full swing - but Lloris turned the strike round his near post.Chadli found the net after Kane's neat through-ball, but the Morocco midfielder was judged offside and the strike chalked off.Tom Heaton produced a solid save to deny Kane in a one-on-one, and the Spurs frontman was later just unable to reach Eriksen's low cross in another reasonable opening.While Spurs were unable to extend their lead the hosts retained control in the second-half, meriting the hard-fought victory in the event