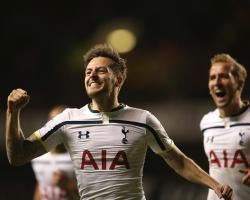 Tottenham Hotspur 3-1 Nottm Forest: Match Report - view commentary, squad, and statistics of the game as it happened.Mason strike inspires SpursTottenham edged the battle of the B teams with Nottingham Forest, sneaking into the Capital One Cup fourth round after Ryan Mason's wonderful long-range effort inspired a late comeback victory.A combined total of 20 changes were made by Mauricio Pochettino and Stuart Pearce at White Hart Lane, with this weekend's north London derby and Forest's promotion push the clear priority.It had looked like Forest would leave victorious after Jorge Grant's second-half effort, although a wonderful strike from Mason was followed up by a poacher's goal from Roberto Soldado and a fine Harry Kane attempt as Spurs ran out 3-1 victors.The third-round victory was not the prettiest but a much-needed boost for Spurs, having gone four matches without a win in all competitions.The latest saw was a 1-0 home defeat to previously-winless West Brom - a performance Pochettino described in programme notes as "an extremely bad day for everyone".It looked like worse was to come against the unbeaten Championship leaders, who came close to taking a first-half lead when Ben Osborn ended a slaloming run with a strike off the underside of the bar.Forest continued to impress after half-time and took the lead in the 61st minute through full debutant Grant, sending the raucous travelling support into raptures - many of whom clad in green jumpers to mark the 10th anniversary of Brian Clough's passing.Pearce, a key player during his tenure, celebrated wildly, although Spurs soon equalised with Mason coming off the bench to score a fantastic 30-yard effort on just his fifth appearance for the club.It proved the catalyst to a late resurgence by Spurs as Soldado soon turned home an Andros Townsend shot, before Harry Kane latched onto a crafty Erik Lamela pass to fired home in stoppage time

Given Spurs made 11 changes, it was unsurprising they struggled for coherence in the early stages.A blocked Jan Vertonghen strike was all they could muster in a tepid start, which was almost set alight thanks to a wonderful, solo effort from Osborn.Dispossessing Nabil Bentaleb in his own half, the Forest midfielder burst forwards, shrugged off Benjamin Stambouli, flicked the ball around Federico Fazio and unleashed a wonderful strike that beat debutant Michel Vorm but rattled the underside of the bar.Grant saw a curling follow-up effort well-saved by the Spurs goalkeeper, who would have been tested again soon after had Fazio not recovered from an initial mistake to deny Lars Veldwijk a goal-scoring opportunity.Townsend got away with what appeared to be a handball in his own box during a spell of Forest pressure, which the winger followed up with a low, fizzing 30-yard strike at the other end.Fazio tried his luck from even further out, with a powerful 35-yard drive just clearing Dorus de Vries' goal, before Townsend tried his luck again.Paulinho came close with an audacious backheel when the teams emerged for the second half, although Forest were looking the bigger threat.Osborn flashed an effort wide and a Veldwijk header was blocked by Vertonghen, before eventually breaking the deadlock in the 61st minute.Veldwijk cut the ball back from the byline and, after a slight touch Stephen McLaughlin took the sting out of the cross, Grant coolly slotted home.Pearce punched the air and looked to the heavens on the touchline as counterpart Pochettino stared down the barrel of a fifth successive match without a win.Paulinho and Kane failed with headers as Spurs looked for a leveller, which came courtesy of a moment of magic from Mason.On just his fifth appearance for the club, the 23-year-old midfielder powered a wonderful right-footed effort into the top left-hand corner from 30 yards.Spurs' first shot on target was one to remember and a strike Townsend attempted to match with a fiercely struck 25-yard free-kick that smacked the bar.The hosts would not have to wait long to pull ahead, though, as the England winger tried another attempt, with Soldado this time stretching a leg out to direct past De Vries.It was a sucker-punch for Forest, with matters getting worse in stoppage time as substitute Kane met a neat reverse pass by Lamela to fire home from an acute angle