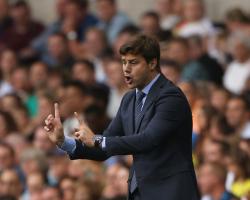 Tottenham Hotspur 4-0 QPR: Match Report - view commentary, squad, and statistics of the game as it happened.Rampant Spurs ruin Redknapp's dayMauricio Pochettino could quickly become the new darling of White Hart Lane after his rampant Tottenham side showed no remorse in ruining Harry Redknapp's return.Spurs relied on a last-gasp Eric Dier goal to win at West Ham on the opening day but were out of sight by half-time in their second London derby of the season, with Dier again on target either side of a Nacer Chadli double.Emmanuel Adebayor put the finishing touches to a 4-0 win by scoring in the second half, with goal difference enough to take Tottenham to the top of the table for the time being.Redknapp - the last man to take Spurs into the Champions League - answered a number of calls from the home fans to give them a wave of acknowledgement, but he will not remember this return with any fondness.The 67-year-old has been keen to play three central defenders this season and recruited accordingly by bringing in Rio Ferdinand and former Tottenham man Steven Caulker to play alongside Richard Dunne.But they could not deal with a rampant Spurs front trio, with the rejuvenated Erik Lamela again pulling the strings as Redknapp's first game back at White Hart Lane since his sacking in 2012 - and Pochettino's maiden competitive home game as manager - proved to be the most one-sided match of the new Premier League season so far.Matt Phillips, operating in attack for the visitors in the absence of the injured Charlie Austin, wasted a gilt-edged opportunity to level when he clipped over when through on Hugo Lloris' goal but, other than a couple of other half-chances, Rangers were simply outclassed.Lamela's first-minute chance set the tone for the afternoon as QPR wing-back Armand Traore gifted possession to Adebayor, with his ball then finding the Argentina international whose effort deflected behind for a corner.The home side were deservingly ahead shortly afterwards as Chadli calmly took down Adebayor's cross to the back post and slotted past Rob Green

QPR had been complicit in their own downfall, with Christian Eriksen robbing Loic Remy of the ball in midfield to set the Tottenham move in motion.Redknapp would have been alarmed by the way his side had started defensively, with a QPR free-kick being countered by a powerful Jan Vertonghen run and Adebayor shooting straight at Green from the Belgian's pass.Phillips was then guilty of missing an easy chance to level after latching on to Joey Barton's long goal-kick.The Scotland international forward did well to initially take the ball down and bypass Younes Kaboul but he then miscued a chip and sent his effort well over the crossbar.The miss was almost compounded as Spurs broke and Ferdinand went through the back of Lamela to concede a free-kick in dangerous territory, with Eriksen's set-piece bouncing back into play off the crossbar.The second goal came just as QPR looked to be slowly clawing their way back into the contest

Dier evaded QPR new boy Leroy Fer and stooped to head Lamela's 29th-minute corner past Green.Pochettino's side needed just seven more minutes to end the game as a contest, easing through the ramshackle QPR defence at will as Chadli headed home his second of the afternoon following a smart cross from the impressive Lamela.Redknapp switched to a back four at half-time as he introduced Nedum Onuoha in place of Dunne, who had struggled more than his defensive partners in the first half.Still the goals continued to come for the hosts, Adebayor with the fourth, finishing with aplomb after Chadli and Danny Rose combined well down the left.Chadli received a standing ovation as he was replaced by Harry Kane with a little over 20 minutes remaining, and Fer's inauspicious debut also came to an end as Alejandro Faurlin took his place.Bobby Zamora was also thrown on by Redknapp in the hunt for a consolation, but it was a deflected Caulker shot after 78 minutes that finally saw Lloris have to make a save of note.The ball did find its way past Lloris later in the half as it looped in off the head of Rose, with Anthony Taylor rightly ruling out the goal following a clear push.Redknapp had waved to the Spurs fans when they sang for him to do so in the first half but, when he once again answered their calls late on, QPR's travelling contingent jeered their manager for the show of affection.Former Tottenham striker Zamora summed up QPR's afternoon as he snatched at a close-range effort and ballooned the ball into the stand - much to the joy of the jubilant home crowd