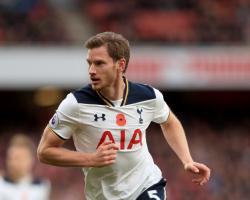 Tottenham striker Harry Kane finished off a special week in style by scoring a brace in Spurs' 5-0 victory over Swansea at White Hart Lane on Saturday.

Kane, who signed a new five-and-a half year deal on Thursday, put the hosts ahead after they were awarded a soft penalty when Kyle Naughton brought down Dele Alli in the area.

Swansea never found themselves in the game and Spurs doubled their lead just before half-time through an impressive strike by Son Heung-min.

Eriksen added his second, and Tottenham's fifth, in injury time

Mauricio Pochettino only made one change from the side that lost 2-1 to Chelsea last weekend with Danny Rose back in the team after sitting out due to suspension and Mike van der Hoorn started his first game since November 6 for the Swans, replacing the injured Federico Fernandez.

Swansea's back four looked strong from the beginning, keeping a number of Spurs attacks from reaching goalkeeper Lukasz Fabianski but the game was briefly stopped just before the 10-minute mark for defender Kyle Walker, after he was caught in the head by the boot of Neil Taylor.

Spurs, who had only won one of their last 10 games, dominated a Swansea side struggling in the relegation zone and went close to taking the lead on 20 minutes but Kane's header was pushed over the bar.

The visitors failed to have a single shot in the first half but it looked as though they had done enough to reach half-time on level terms until the 38th minute.

Alli nicked the ball ahead of Naughton but even if there was contact, it certainly was not enough to prompt the midfielder's theatrical tumble.

Kane did the honours and sent goalkeeper Fabianski the wrong way to give Tottenham a well-deserved lead.

Just as the fourth official was putting the board up for injury time, the home side doubled their advantage through Son, who hit the ball on a half-volley to score his sixth goal of the season.

Swans manager Bob Bradley attempted to counter the continual Spurs attack by bringing striker Fernando Llorente on at half-time to add some height to their attack but it was not long before Spurs were back in control of the game.

Swansea had started to show some promise up-front with an extra striker on the pitch but the hosts punished them on the counter when Alli found Son unmarked on the wing.

The 24-year-old forward failed to get his shot away before Kane, sprinting into the box, powered a low shot past Fabianski to score his eighth goal of the campaign.

Kane appeared to have secured a hat-trick just after the hour-mark but his goal was disallowed by the assistant referee who flagged correctly for offside.

With 20 minutes left Tottenham buried the game through Eriksen as Fabianski saved Alli's shot with his foot and the Spurs midfielder beat Jordi Amat to the ball to head it into an open net.

The game was Bradley's heaviest defeat since becoming manager of Swansea as Spurs made it five in injury-time when Eriksen found the back of the net for the second time.

The result means Swansea drop to the bottom of the Premier League table.