7 Defensive Midfielders Tottenham Should Target in the Summer Transfer Window

There's no doubting that the summer transfer window will be critical in shaping Tottenham's Jose Mourinho era.

When everybody's fit and ready to roll, this is a very talented Spurs side. And although it may not seem like it, they're only one or two players away in a couple of positions from building another false daw- I mean something majestic in north London. And without question, one of those areas is defensive midfield. It's been a problem area for Spurs since Mousa Dembele's departure 13 months ago, with their current senior options - Victor Wanyama and Eric Dier - simply not viable anymore, although Harry Winks has recently demonstrated his ability to ably fill that role.

Despite this, the need for a young, mobile defensive-minded midfielder is paramount. A player physically imposing but equally as composed in possession would be ideal, while they would need to be comfortable playing in both a single and double pivot - due to Mourinho's tactical adaptability.

Fortunately for the Lilywhites, there are a few out there who fit the bill. Here are seven names they should be taking a look at when the season's up. The 22-year-old has been compared to Manchester City great Yaya Toure ever since he burst on to the scene as a teenager - his gangly 6'3 build might have something to do with that.

Sangare has proven to be a fine defender and someone capable of playing the number six role. His strength and size make him incredibly tough to beat one-on-one and going forward he's not too shabby either.

In his debut season in Ligue 1, Sangare had the third-highest dribble success rate (81%) in the league - his ability to hold off opposition players and manipulate the ball in tight areas of the pitch is second to none. The Ivorian also possesses a tremendous passing range and he's more than capable of playing vertically between defensive lines.

Sangare is a raw talent and is a player who will have to be nurtured if he moves to the Premier League, but his unique skill-set for somebody his size is rare and he has all the makings of a world-class defensive midfielder. 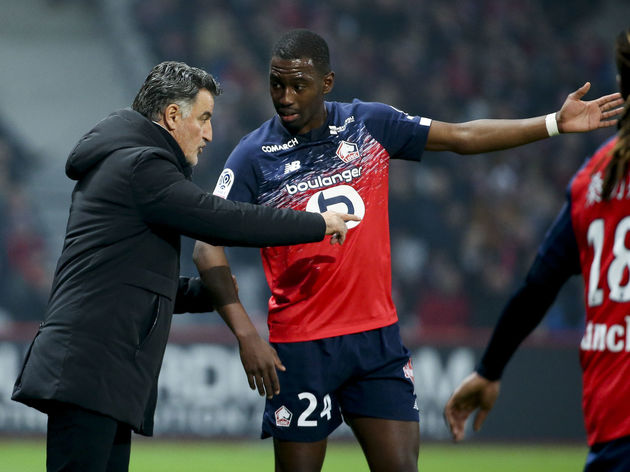 While not a natural defensive midfielder, there's little doubting that Frenchman Soumare has all the attributes to be a fantastic number six.

Blessed with an imposing tackling ability and astute positional awareness, Soumare is a fine defender who can be great to watch with the ball at his feet due to the ease and elegance at which he drives past opponents - eerily similar to Paul Pogba.

His passing ability, especially his range, is improving season-on-season since his emergence in 2017, regularly penetrating defences with vertical, line-breaking passes, as shown by his 6.87 passes into the final third this season (per 90 minutes) - more than all of Spurs' current midfield options not called Harry Winks (6.94).

It's fair to say that a midfield containing Soumare, Tanguy Ndombele and Giovani Lo Celso would be box office, but you can expect the 20-year-old to have plenty of suitors in the summer. Switching from Napoli to Roma last summer, Diawara has become a key part of Paulo Fonseca's tactically interesting side this season.

The Guinea international is adept at picking up possession deep in his own half - often helping Fonseca's side progress from the back by dropping into defence to create a back three. Over the last two campaigns, Diawara averages 6.15 passes into the final third per game - with the 22-year-old excelling at finding his more creative players in the 'half-spaces'.

His movement on and off the ball means he's perfect for kickstarting attacking transitions - a principle that Mourinho's Spurs have thrived off thus far - and out of possession, Diawara loves to press and use his physicality to overwhelm opponents.

With the Guinean only being at the club for just a year (come summertime), it's hard to envisage Fonseca allowing such a key spoke in the wheel to leave so soon. After making an audacious late move for the Dane in January, it wouldn't be surprising to see Spurs go in for Hojbjerg in the summer - and they'd be right to do so.

Although he's slightly older than most of the other targets at 24, his Premier League experience may give him the edge. Hojbjerg thrives off hassling opponents from the blindside and is crucial in Ralph Hasenhuttl's sophisticated man-oriented press at Southampton.

While he'll add natural ball-winning abilities in the middle of the park - his 58 tackles rank seventh among Premier League midfielders this season - Hojbjerg, the Saints' current skipper, would also provide Spurs with another leader in the dressing room.

Astute business? I think so. The lynchpin in Marcelo Bielsa's Leeds side, Phillips has established himself as arguably the Championship's best player over the past couple of years.

Like Diawara, Phillips often collects the ball deep off his centre halves and acts as the 'conductor' of the United side - with his press-resistance and passing range helping him direct his side's attacks.

Defensively, very few (if any) are superior to the 24-year-old in the second tier. Despite his side often being the protagonist in games, Phillips still averages four interceptions - including nine against Arsenal

Overall, he looks like a tremendous fit for this Spurs side. Daniel Levy and co would be wise to snap himPremier League Zakaria is another player who dominates physically in the middle, while he's proven himself to be more than capable of linking play in a double pivot - boasting an 85.6% pass completion rate in the Bundesliga this season, just shy of his best in 2017/18 (90%).

The 22-year-old ticks a lot of boxes; he's tall, powerful and athletic, while he also excels at breaking up play due to his typically powerful challenges and fantastic positional awareness.

The Switzerland international enjoys picking the ball up from his centre halves, carrying the ball and supplying his team’s flair players in the final third. Zakaria's stellar display as part of a three-man defence against RB Leipzig also highlighted the Monchengladbach man's versatility.

A move for Marco Rose's dynamo, however, will likely come with a rather hefty price tag. Another exciting prospect out of Benfica's elite academy, 20-year-old Florentino's a raw talent who simply can't be overlooked.

While his eagerness can often lead to him being beaten in one-on-one situations, Florentino is still tremendous defensively - with his incredible instincts and reading of the game helping him register nearly seven interceptions a game this season. His long limbs and wiry tackling ability, meanwhile, have seen him earn the nickname

In possession, he plays a relatively simple but vital role in Bruno Lage's Benfica side, doing it superbly - effectively linking defence and attack from a deeper position in midfield by penetrating the opposition's defensive lines with vertical passes.

To have a 20-year-old who's remarkably intelligent in possession and so instinctive out of it is rare, and despite still having a lot to learn, the Portuguese youth international looks like a superstar in the making.