The team from White Hart Lane have often been overshadowed by their north London neighbours but there have been plenty of times they’ve come out on top.

With many players to pick from, it’s time to look at a pick of the best clutch players Spurs have fielded during their time in the Premier League. We’ll start with a current star.

When Son joined Tottenham from Bayer Leverkusen in 2015, not an awful lot was known about him in England. Fast forward five years and there’s not a lot of Premier League fans that the South Korean international hasn’t endeared himself to.

A tireless runner, classy finisher with an infectious personality, Son is the man in the current Spurs team everyone has looked to to provide the winning sparks in Harry Kane’s numerous absences. After numerous braces and winners in the league and Europe, there’s no doubt that Son Heung-min is Tottenham’s current man for the big moment.

Biggest Moment: His brace against Manchester City in the Champions League quarter final last season which set Spurs up for a famous away goals victory. Mauricio Pochettino once claimed that if Tottenham had Dembele when he was 18 or 19, he would have become one of the best players in the world, ranking him up there alongside Maradona and Ronaldinho. High praise indeed, but the Belgian international really was one of the best midfielders in the world for a time.

Dynamic, athletic, tough as old boots, Dembele added considerable steel and energy to Spurs midfield, something they’ve sorely missed since. Just look at the implosion during the 2015/16 Premier League title challenge, it all fell apart the moment Dembele was sent off for an eye gouge on Diego Costa. That’s how important he was for that young team.

Biggest Moment: A swashbuckling performance against Juventus in February 2018 as he controlled the midfield in a Spurs fightback from 2-0 down in Turin to draw 2-2, a performance that probably still leaves Sami Khedira waking up in cold sweats. Now back to a time when European football was barely on Tottenham's radar. Armstrong was bought in 1995 to replace fan favourite Jurgen Klinsmann, a daunting task for any forward never mind one that had been purchased from a relegated club.

Armstrong received criticism in the beginning, mainly due to not being as good as Dennis Bergkamp, but he kept his head down and kept scoring on a regular basis until injuries ended his time at Spurs – not before he’d endeared himself to the Lilywhites faithful with some important goals.

Biggest Moment: He had a knack for scoring in the cup, and none were more important than his two against Man Utd in the 1998/99 League Cup quarter final to knock the Red Devils out of the only competition they failed to win that season. Even though Spurs won, it was a disgrace Armstrong didn’t make it off the bench in the final. Speaking of Klinsmann, the German striker had a few clutch moments of his own while in north London. It was a surprise to everyone when the World Cup winner signed for Tottenham in 1994 when they’d only just escaped relegation, but from the moment he joined, he swan dived his way into the hearts of fans across England.

Inspiring the club to a much improved seventh placed finish, scoring a winner in the FA Cup quarter final against Liverpool and in the losing semi against eventual winners Everton. Klinsmann came as quick as he left, his performances prompting German giants Bayern Munich to buy him in 1995, but that wasn’t the end of the love affair…

Biggest Moment: Jurgen returned to Spurs on loan for the second half of the 1997/98 season and his nine goals saved the club from relegation. During that second spell he scored four goals on the final day away against Wimbledon, which confirmed Tottenham’s Premier League survival. 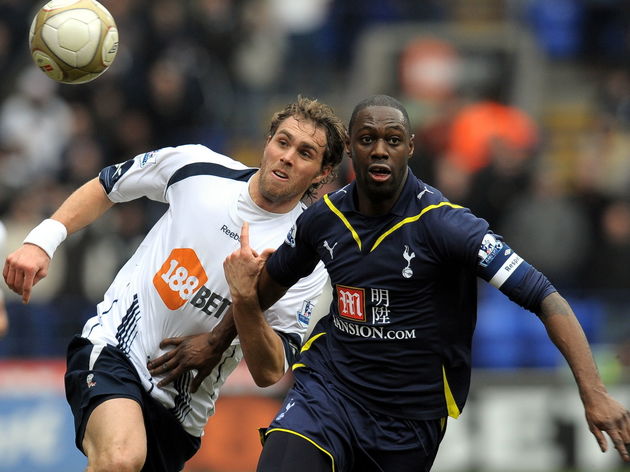 Oh what could have been. Between 2002 and 2006 England were blessed were more brilliant centre-backs than any team needs, but the best of the lot was arguably Ledley King, as much as his knees disagreed.

Not much needs to be said about King. It’s all in his name. Even when he couldn’t train anymore, he could always be relied upon to save Tottenham at the back during an era when defending wasn’t exactly the club's strong suit. He even had the record for fastest ever Premier League goal for over 18 years, there wasn’t much he couldn’t do...except stay fit.

Biggest Moment: Captaining Spurs to the 2008 League Cup final win against Chelsea. The game may be remembered for Jonathan Woodgate scoring the winner, but Ledley King’s ability to keep Chelsea’s own big game player, Didier Drogba, quiet for the majority of the game was just as important to the victory. Footballer, actor, model, there’s not many extremely stylish things that David Ginola can’t do. Anyone remember when he ran for president of FIFA? What a character, but more importantly what a player. Ginola was a steal at £2.5m from Newcastle 1997 and went onto win the PFA and FWA Player of the Year awards the following season – even in Man Utd’s treble winning campaign.

Ginola played with aplomb, had skills for days and a list of admirers as long as his hair. The left flank had never looked so good at White Hart Lane, and never did again...until our next entry announced himself.

Biggest Moment: March 1999, FA Cup sixth round against a stubborn Barnsley team that were defending for their lives. The game looked set to go to a replay,when with 20 minutes to go, David Ginola danced through the Barnsley defence and stroked the ball underneath the keeper to send his side into the semis. What. A. Goal. It was coming. This list wouldn’t be complete without the man who was arguably the catalyst for Tottenham’s upturn in fortunes from an upper mid-table/UEFA Cup side to genuine title contenders. Gareth Bale was a world class talent who erupted at San Siro against Inter, effectively ending Maicon’s world class tag with a brilliant hat-trick.

Bale dragged Tottenham to fight for Champions League qualification year after year only to miss out on most occasions. The lack of investment prompted Bale to leave for Real Madrid, in a move that ironically provided the funds for Spurs to become a top four side in the long run. And just think, Harry Redknapp nearly swapped him for Kenwyne Jones in 2009.

Biggest Moment: Despite his famous performance against Inter, Tottenham actually lost that match – so instead we’re going for his goal against West Ham at Upton Park in 2013. The phrase “he’s won the game by himself” is used a lot, but it was true on this occasion. Bale was truly on another level that game and it’s no wonder he joined Real Madrid that summer.