Advantage Spurs thanks to Townsend 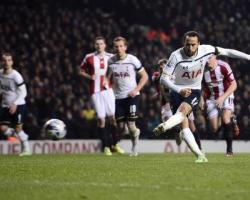 The Blades' cup performances over the past year have belied their League One status, securing five Premier League scalps and reaching the last-four juncture of last season's FA Cup and now this competition.

United looked like they would once again prove the scourge of top-flight opposition, only for Townsend's second-half penalty to see Tottenham eke out a 1-0 win in north London.

It is a welcome cushion ahead of what is sure to be a combative second leg at Bramall Lane next Wednesday, especially if Clough's men can match this performance.

United started brightly and frustrated Spurs in the first half, showing no ill-effects of the traffic-delayed arrival which saw kick-off put back until 8pm.

An Eric Dier header was the only shot on target either side could manage in a dull opening period, although Emmanuel Adebayor should have tested United goalkeeper Mark Howard as half-time approached.

The Togo striker, captaining the side on his first start since November 2, was perhaps fortunate not to receive a red card before that after catching Louis Reed - and was once again booed by some Spurs fans

His substitution proved a shrewd move as replacement Roberto Soldado quickly made an impact, with his presence causing Jay McEveley to flap an arm at the ball and referee Neil Swarbrick to point to the spot.

Townsend duly converted the penalty, much to the home faithful's relief, although Mauricio Pochettino will know a much-improved display will be needed in the Steel City if they are to reach the Wembley finale.

Much of the focus ahead of this match surrounded two former United players with the Tottenham ranks.

Kyle Naughton and Kyle Walker arrived together from the Blades in 2009, although the former was absent ahead of a move to Swansea as the England right-back started against his boyhood club.

Walker was cheered from the outset by the visiting supporters, who were in fine voice after making an impressive start to this delayed match.

Neither United nor Spurs were able to create clear-cut chances, though, with the only early moment of note saw appeals for the hosts to be reduced to 10 men.

Clough and his coaching staff jumped off their seats after Adebayor caught Louis Reed's face, although, after some deliberation, referee Swarbrick only dished out a yellow card.

It was a moment that sparked the match into life, with Spurs fan Jamal Campbell-Ryce fizzing a strike across the face of goal before Blades goalkeeper Howard palmed away a Dier header.

That was the north Londoners' only shot on target during a tense first half, although Adebayor should have tested Howard after impressively bringing down a floated Christian Eriksen ball, only to flash over under pressure.

Dier's header wide in stoppage time was Spurs' only other effort of note before half-time, which they came close to going into behind as Stefan Scougall fired just wide after Ben Davies sloppily gave away possession.

United returned from the break with the same intensity, but were making an increasing number of mistakes.

Fortunately for Clough's men, Tottenham could not capitalise as they struggled to break down the League One side.

That lack of cutting edge saw Pochettino make a double change with 25 minutes remaining, with Mousa Dembele and Soldado replacing Ryan Mason and Adebayor, who was booed by some Spurs fans for the second successive match.

It did not take long for those alterations to have the desired effect, with Harry Kane freed up to take a shot blocked by Chris Basham, before Soldado earned a 74th minute penalty.

Jan Vertonghen clipped a diagonal ball to the Spain international and McEveley, who had been swinging his arm around claiming offside, clumsily handled.

Townsend stepped up for the resulting spot-kick and, while it was far from a perfect penalty, it beat Howard down low to his left.

United pushed for a late leveller but substitute Jose Baxter failed to test Michel Vorm and Jamie Murphy fired wide after a tame Paulinho attempt at the other end.