Tottenham Hotspur are through to the 2019 Champions League final and will face Liverpool thanks to Lucas Moura's hat trick after an extraordinary second half fightback in Amsterdam on Wednesday evening.

The hosts took an early lead when captain Matthijs De Ligt rose highest from a Lasse Schone corner to powerfully head home, putting the Dutch side in a commanding position after just five minutes. Ajax doubled their advantage in the 36th minute when Dusan Tadic laid off Hakim Ziyech who smashed a thunderous strike across Hugo Lloris to put the Eredivisie leaders seemingly out of sight.

Lucas Moura pulled one back for Spurs ten minutes into the second half thanks to superb work from Dele Alli, before the Brazilian forward equalised on the night De Godenzonen have had an extraordinary season, and were aiming to become the first side from outside of Europe's top five leagues to reach the final of Europe's elite competition since Jose Mourinho's Porto in 2004.

With Ajax three up in the tie at half-time, the Johan Cruyff Arena was in unison singing Bob Marley's 'Three Little Birds' during the interval.

Well, Spurs gave them plenty to worry about when they grabbed two quick-fire goals in the second half after the hosts came out looking a totally different side, sitting back and defending their lead rather than going for the kill.

That decision, intentional or not, came back to haunt them, as they threw away probably the greatest chance they will have for many years to reach the Champions League final. 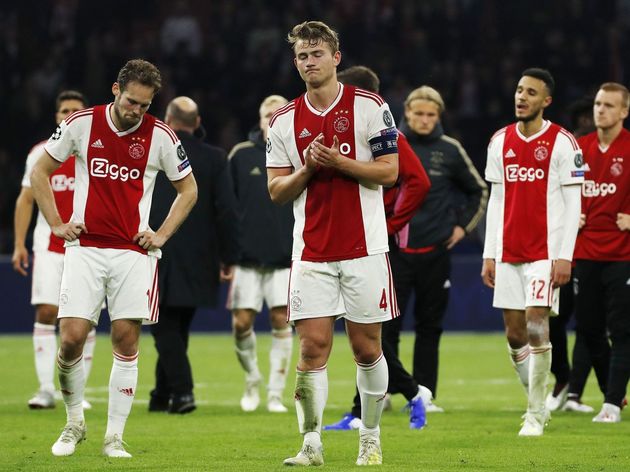 As great as they've been this season, and as harsh as it may sound, they blew it. The captain remained calm at a time when his teammates around him appeared to be losing their heads, and put in a number of crucial challenges and blocks to stop Spurs scoring that all important third goal.

His early goal was vital to give an already electric crowd the buzz and the breathing room they so desperately craved, but his distribution was also exceptional.

He was extremely unfortunate to be one of those Ajax players on the losing side.

May 8 2019 will forever be remembered as one of Tottenham's greatest nights.

Their game plan was clear: let Ajax have the ball and hit them on the counter-attack when possible, which is easier said than done against this special young side.

In the first half that didn't work, andSpurs

This is what it meant to Spurs boss Mauricio Pochettino #THFC pic.twitter.com/9iJz7L5h0b His team looked dead on their feet after the first half, but his powerful and aggressive runs got him in the right positions to bury the three chances that came his way.

Dele Alli and Moussa Sissoko were exceptional in midfield, but Lucas will forever be a Spurs icon due to what he did on the night in the Johan Cruyff Arena. An unforgettable game for the forward.

Ajax will look to maintain their lead at the top of the Eredivisie when they host Utrecht on Sunday afternoon, before finishing their league campaign at De Graafschap next Wednesday.

Tottenham are aiming to finish above Chelsea in third as they finish their Premier League campaign at home to Everton on Sunday. They will face Liverpool in the Champions League final in June.