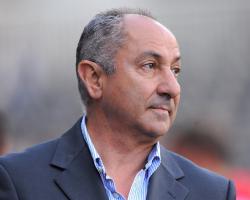 Ardiles' former Tottenham team-mate Ricky Villa was also involved in the incident on Monday, which took place while the pair were on the island to film a documentary.

A spokesperson for the Falkland Islands Government revealed Ardiles had now travelled home to Argentina to continue his treatment.

She said: "I can confirm that (soundman) Carlos Marcellan and Ossie Ardiles were last night transferred to Buenos Aires for further investigations. We hope they both have a speedy recovery."

Ardiles signed for Tottenham in 1978 from Huracan, winning the FA Cup with them in 1981.

He headed to Paris St Germain for a year on loan during the Falklands War, but returned to help the club to the UEFA Cup in 1984.

The Argentinian played 311 times for Tottenham. Ardiles also had a brief and unsuccessful spell as manager, but he is still revered by Spurs fans and is a regular at the club's games.

Villa joined Spurs at the same time as Ardiles and scored twice in the 1981 FA Cup final replay win against Manchester City.

In the run up to the final, Tottenham released a song called ''Ossie's Dream'', which is still sung by Spurs fans today.

Ardiles was taken to King Edward VII Memorial Hospital in Stanley following the accident, and had passed on his appreciation to all those who assisted him and the others injured.

"Thank you to everyone in the Islands who has helped, without exception," he said.

"From the moment of the accident, the attention and care we have received from the police, the RAF helicopter team, the doctors and nurses here has been world class.

"Thank you to everyone for your concern. I am fine and doing well."