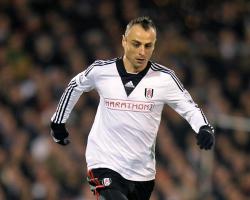 The 33-year-old Bulgarian is expected to undergo a medical with the Ligue 1 side this afternoon, with German midfielder Lewis Holtby joining Fulham on loan from Tottenham for the rest of the season.

The 21-year-old has joined the Bluebirds for the rest of the season and should get a chance to prove his Premier League quality after a frustrating six months at United.

He will bring that little final bit to find pockets of space and produce a bit of magic."

Sunderland have signed Scotland midfielder Liam Bridcutt from Brighton on a three-and-a-half-year deal for an undisclosed fee, while Southampton striker Dani Osvaldo has moved closer to joining Juventus as he underwent a medical with the Italian league leaders.

The 28-year-old Italy international arrived in a club-record deal from Roma last summer but has failed to live up to the billing and was recently involved in a training-ground bust-up.

Lyon midfielder Clement Grenier has confirmed he intends to stay with the French club following interest from Newcastle.

"I don't intend to leave

It's not a priority, even if the offers from big clubs make you think," Grenier said on Lyon's website.