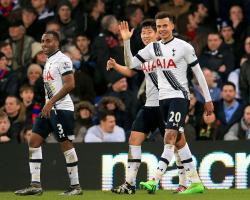 With the score at 1-1 in the final 10 minutes after Harry Kane had cancelled out Jan Vertonghen's own goal, England international Alli further enhanced his growing reputation with a balletic volley to make the score 2-1 and effectively secure all three points.

Substitute Nacer Chadli added a third goal in stoppage time, and with it fourth-placed Spurs strengthened their pursuit of a Champions League place while condemning Palace to a third consecutive defeat.

Spurs boss Mauricio Pochettino had made eight changes to the team that won 2-0 in the FA Cup third round at Leicester on Wednesday, retaining only Son Heung-min, Eric Dier and Christian Eriksen, but they began with intensity and without any apparent disruption.

Against less resilient opposition, the fluid talents of Eriksen, Alli and Kane would have created several goalscoring chances in a promising opening half-hour, and had they done so and taken just one then victory would likely have proved almost routine.

Instead, they had been restricted to hopeful shots from Kieran Trippier and Kane, and an off-target header from Toby Alderweireld, when the concession of possession gifted Palace the lead.

Eriksen had given the ball away on the edge of the area after an aimless 30th-minute attack had ended when Zaha collected the loose ball, ran into Spurs' penalty box and sent a low cross in front of goal, where it was deflected beyond Hugo Lloris via Vertonghen's left foot.

Palace's pace on the counter makes them at their strongest when they lead, and their confidence - after two consecutive defeats - clearly grew.

Spurs' Danny Rose forced an impressive reaction save from Wayne Hennessey in the 39th minute, when from directly in front of goal he volleyed Eriksen's cross near the goalkeeper, but they were thereafter short of inspiration and Pochettino responded by sacrificing Dier for Chadli early in the second half.

Doing so posed a risk

Removing his finest defensive midfielder for an inconsistent winger could have led to Palace extending their lead, but instead it was Chadli who created the equalising goal in the 63rd minute.

Taking possession after Rose's blocked cross, the Belgian turned and chipped the ball towards Kane, and the striker rose to head beyond Hennessey and into the top corner.

Palace had chances to reclaim the lead, Scott Dann hitting the crossbar with a header and substitute Mile Jedinak doing likewise with a shot from the rebound in the 80th minute, but they could not take advantage and that made Alli's 84th-minute stunner all the more special

Near the edge of the area Eriksen headed Kane's cross to Alli, and despite him appearing to have few options the 19-year-old took one touch to control possession, another to flick it over Jedinak, and with the third - after turning the midfielder - powerfully volleyed into the bottom left corner.

It was the latest fearless demonstration of his swiftly-improving talent, and of the instinctive intelligence that gives him such potential.

Alli hit the crossbar again in the final minutes, but it hardly mattered.

Chadli curled a third goal in from the edge of the area in the fourth minute of stoppage time, but it was Alli's outstanding goal that had secured a victory that keeps Spurs in contention at the top of the table, and for which this game will be remembered