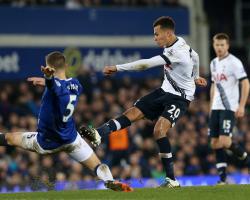 Alli produced the latest eye-catching performance of his impressive campaign in Sunday's 1-1 draw at Everton, capping the display by scoring a fine volleyed equaliser in first-half stoppage time.

The 19-year-old, signed from MK Dons 11 months ago, has emerged as one of Tottenham's key players this term, has also broken into the senior England team and is hoping to feature at Euro 2016 in the summer.

Pochettino, who has started Alli in all but one of Tottenham's Barclays Premier League games since early September, described his goal as "fantastic", before adding: "From the beginning we have had to take care with him.

"That is important when they are young, to handle them in a good way.''

The manager then, when asked if he could see Alli coping with continuing to play in the team every week for the rest of the season, said: "Yes - if he shows in every training session he deserves to play, why not?''

Alli's leveller was the least Tottenham deserved from a first half they had dominated but trailed in from the 22nd minute when their former winger Aaron Lennon fired home emphatically - a goal that came between Spurs pair Harry Kane and Ben Davies each hitting the woodwork.

The game was more even after the break, with neither team able to seize the victory.

Pochettino, whose men had won their previous three top-flight matches, rated the first-half display as up there with the best of what Tottenham have produced this season and was in no doubt the result ultimately represented two points dropped.

Tottenham, now six points behind league leaders Arsenal in fourth place, were being talked up pre-match as possible title contenders.

And when asked afterwards how he saw his team's title chances, Pochettino said: "It is too early to speak about that

I think the way we are, all can happen.

"Always at the end of the game we play some music but this time we (did not, because we) are very disappointed, because the feeling is we dropped two points - and this is a very good sign for the future.

"We are showing our winning mentality."

They have won only once in seven Premier League games, while their top-flight home record for 2015-16 so far shows just three victories.

This draw was, at least, an improvement on their last two efforts at home - a 3-2 loss to Leicester and 4-3 reverse against Stoke.

And Everton boss Roberto Martinez said: "I thought throughout the game we had a very, very good performance.

"We have been conceding goals cheaply at home and it was something we had to rectify."