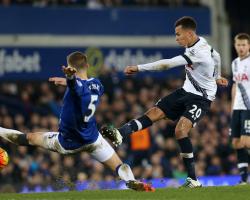 Although the visitors dominated the first half, they fell behind in the 22nd minute when ex-Spurs man Aaron Lennon smashed the ball home at the end of a fine Everton team move.

Tottenham had struck the woodwork before that goal through Harry Kane and did so again via Ben Davies before deservedly equalising in first-half stoppage time when Alli fired in.

Everton improved after the break and substitute Muhamed Besic and Ramiro Funes Mori went close for them, but neither side could find a winner.

The result sees Tottenham's run of three straight Barclays Premier League victories come to an end, and the gap between them in fourth and leaders Arsenal now stands at six points, while they are three points clear of fifth-placed Manchester United.

They were being talked up as possible title contenders in the build-up to the game, and while that remains very much up for debate, there was enough for boss Mauricio Pochettino to be encouraged by here.

Roberto Martinez's Everton, meanwhile, remain 11th and they have now won only once in seven league matches

Toffees fans have seen their side triumph just three times at home in the top flight this season and their frustrations continue.

Tottenham looked full of confidence from the off, applying plenty of early pressure, and they were inches away from going in front in the ninth minute when Kane's low, drilled effort from outside the box came back off the inside of the post.

Everton were struggling to get hold of the ball, let alone do anything with it, but then produced a moment of quality to suddenly snatch the lead.

Tom Cleverley collected the ball from Leighton Baines' backheel and lofted in into the area, where Romelu Lukaku nodded it down and Lennon took one touch before lashing it into the net, registering his first goal of the season on only his fourth league start.

Arouna Kone had a shot blocked as Everton looked to keep up the momentum, but Tottenham were soon threatening again and around the half-hour mark they rattled the goalframe again, Davies' strike cracking against the bar.

The leveller that was the least Spurs deserved duly arrived in the final moments of the half, and was another finely-crafted effort involving an excellent long-distance pass.

Toby Alderweireld was the man to deliver it this time, sweeping the ball forward from inside his own half, and Alli did superbly to control with his chest and hook past Tim Howard.

Alli showed more neat play with his chest soon after the break as he guided a Davies cross into the path of Kane, who was put off as he tried to shoot by John Stones.

Gerard Deulofeu, recently introduced by Martinez as a substitute, then produced a dangerous delivery that Lukaku just failed to convert with his head at the far post.

The impressive Alli unleashed a long-range effort that Howard dealt with comfortably, and Everton then went close twice in quick succession at the other end, with Hugo Lloris doing well to tip a piledriver from Besic over the bar and Funes Mori heading narrowly wide.

Lukaku burst through in the dying seconds but put his shot into the stand, before Ross Barkley's shot was saved by Lloris.

Alli put in a lively display featuring some excellent touches and capped by a wonderful goal to bring the scores level.

MOMENT OF THE MATCH

Alli's was just as good in terms of the build-up and finish, but the opener was particularly sweet for winger Lennon given it saw him mark a rare start by netting against his former employers.

VIEW FROM THE BENCH

Roberto Martinez can certainly take positives from his Everton side's first-half goal and second-half performance, but once again this was a home match in which the Toffees ultimately failed to really fire, and one win in seven Premier League matches is hardly an encouraging statistic.

Opposite number Mauricio Pochettino will be largely pleased with his team's efforts, but will surely rue the fact that their complete dominance in the first half only yielded one goal and they could not keep their winning run going.

MOAN OF THE MATCH

Martinez has taken a defensive stance in relation to questioning of Tim Howard's performances of late, but this was another display from the Everton goalkeeper that, while certainly not disastrous, featured some shaky moments

Some Toffees fans voiced their frustrations towards Howard from the stands and his position in the team remains looking insecure.