​Tottenham have identified Ajax midfielder Donny van de Beek as a replacement for Christian Eriksen, should the Dane decide to leave the club in the summer, according to reports.

Van de Beek impressed the Spurs hierarchy during the Dutch side's 1-0 win at the New Tottenham Hotspur stadium last week in the Champions League semi-final, in which the 22-year-old scored the winner. 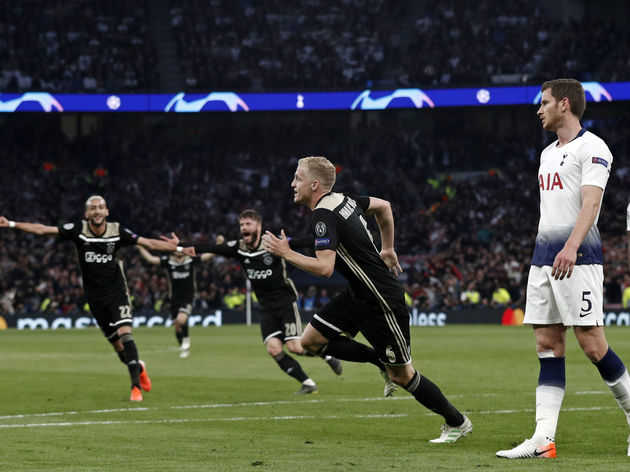 They have been quoted a price of around £45m by Ajax, but Spurs face competition for the attacking midfielder in the form of Real Madrid and Bayern Munich, according to The Mirror.

The north London club are apparently resigned to losing Eriksen, whose contract expires next summer.

Madrid have been linked to the 27-year-old for some time and see the Danish international as a potential replacement for Luka Modric. Mauricio Pochettino is reportedly looking to rebuild his squad, who despite reaching the last four of the Champions League, have seen their form hit a slump in recent weeks, losing nine of their last 11 matches away from home.

Van de Beek is an Ajax youth academy product and has shone during De Godenzonen's extraordinary season, in which they could still complete the treble, getting past the likes of Juventus and Madrid in Europe in the process.

The Dutch international has netted 15 times in 48 appearances for the Eredivisie side during the campaign, as well as claiming 11 assists while playing primarily behind the striker.

Meanwhile, Spurs seem to be resigned to cash in on Eriksen following a season where the playmaker has claimed 12 ​Premier League assists and seven goals in 34 appearances, as they will look to turn a profit on the £12m they paid Ajax for his services in 2014.