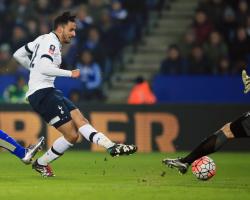 Having drawn 2-2 in the original tie and with Leicester winning the Barclays Premier League meeting in north London last week, Spurs succeeded in the final part of the 10-day trilogy courtesy of goals from Son Heung-min and Nacer Chadli at the King Power Stadium - the scene of a 1-1 draw in the league in August

In the greater scheme of things the Italian may not be too upset by Leicester's exit, although he would be unlikely to admit it

For Tottenham, who must also harbour ambitions of becoming champions, it means another game in an already busy schedule

With both clubs nicely positioned for a sustained assault on a top-four finish in the Premier League and the lure of the riches on offer for Champions League qualification becoming a more tangible possibility with every passing week, it was clear from the team selections where the priority lay

Tottenham boss Pochettino retained Eric Dier, Erik Lamela and Christian Eriksen, with the latter two allowing Spurs to assume a measure of control in midfield and look the more fluent team early on

Gokhan Inler took a free-kick, won via the invention of academy product Chilwell, but it was easily fielded by Michel Vorm in the Tottenham goal

Gray forced Vorm to palm away his curling effort at the start of the second half but Tottenham still looked the most threatening and substitute Harry Kane, a former Leicester loanee, twice came close to making it 2-0 but Schmeichel got down well and got a strong wrist behind each shot

Shortly afterwards though, the second goal did arrive

Ranierii introduced Vardy, but to no avail