Spurs were beaten by Inter in dramatic late fashion on matchday one. As it happens, the goal from Christian Eriksen during that 2-1 defeat in the famed San Siro was what eventually saw the Londoners progress at Inter's expense - the two clubs were tied on points, head to head goal difference and head to head goals scored and so it came down to head to head away goals.

But Spurs, who had enjoyed a famous victory over Real Madrid in the group stage last season, had to bounce back from more than just that opening defeat. They were humbled by Barcelona at Wembley on matchday two, going down 4-2, and then failed to beat PSV Eindhoven next.

Mauricio Pochettino's side were already facing an uphill battle, and then PSV striker Luuk de Jong, a Premier League flop during his Newcastle days, opened the scoring for the Dutch side at Wembley on matchday four. It wasn't until Harry Kane scored twice in the final 15 minutes that Spurs were able to turn the game around and record their first European win of the season.

Beating Inter at Wembley on matchday five was simply vital. Anything other than victory and it was all but over. Yet the win came, two from two, after Eriksen struck late to take revenge on the Italians and set up a final showdown on matchday six with everything to play for. 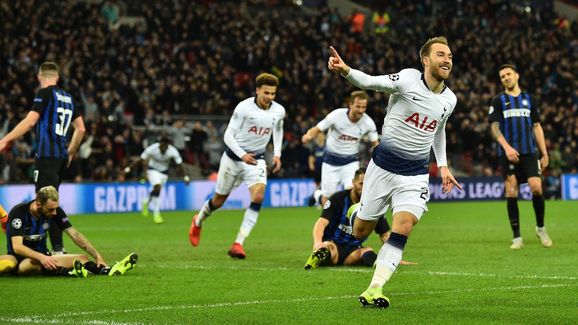 Ahead of the final game, Spurs were level on seven points with Inter, but ahead of the three-time European champions by virtue of that earlier Eriksen goal in Milan on matchday one.

All they needed to do to stay ahead was at least match Inter's result on matchday six. That was certainly easier said than done seeing as Spurs had to visit Barcelona at Camp Nou and Inter were hosting a PSV side already guaranteed to finish bottom of the group.

On paper, it was doable for Spurs, but it needed a heroic performance and a favour elsewhere.

They got both of them. Having fallen behind in Spain through a goal from Barcelona's Ousmane Dembele, Spurs eventually found a late equaliser from super-sub Lucas Moura - late goals have played such a crucial role for the team in the Champions League this season. A draw on its own might not have been enough. But Inter had also fallen behind against PSV, and although talisman Mauro Icardi drew them level in the second half, they were simply unable to find the go ahead goal that would have put them through to the Last 16.

Only a handful of teams in Champions League history have ever successfully made it through a group stage after taking just one point or less from their opening three games. And, having completed the most unlikely of comebacks, Spurs can look forward to the first knockout draw.