Jan Vertonghen: Why His Traumatic Head Injury Must Lead to Rule Changes in Regards to Concussion

​Tottenham hosted Ajax in the first leg of the Champions League semi-final clash on Tuesday night, setting the scene for what should be by all accounts a great game of football.

However, in the 32nd minute, the atmosphere was marred by a clash of heads between Spurs defenders Jan Vertonghen and Toby Alderweireld during an aerial challenge with Ajax keeper Andre Onana - leaving Vertonghen in a bloodied heap.

It appeared as if the Belgian defender had broken his nose, and those who've experienced such an injury can attest that it's not very pleasant, breathing is made extremely difficult and the entire face is in severe pain. 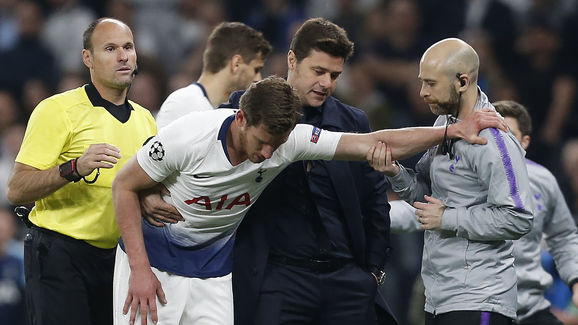 But the more worrying aspect was the fact that Vertonghen showed signs of a concussion. He could barely walk straight and had to be escorted off the field by the medical staff. After his shirt was changed (god forbid there be a bloodied shirt on him) and he spoke to the referee he was given the all clear to return to the pitch.

But obviously he couldn't keep playing, and as he was rushed off the pitch, he looked overcome with nausea and extremely groggy.

So why did the medical staff let him go back to the pitch, when it seemed clear to almost every spectator that the centre back was in no condition to continue?

This isn't the first time that a player has shown signs of concussion and been allowed to continue playing. In the 2014 World Cup final between Germany and Argentina, the biggest match of the year, German defender Christoph Kramer took an elbow to the head, but after completing the cursory examinations he was allowed to return to the pitch. 14 minutes later he collapsed.

i really thought soccer would have its concussion reckoning after christoph kramer got hit by a semi-truck at the world cup finals, but that was five years ago and nothing’s changed pic.twitter.com/YFsbxZ16n6

By his own ​admission Kramer has no recollection of the match. The incident led FIFA to implement a new protocol for head injuries, including a new education programme for referees, coaches, players and medical staff, a three minute period for medical staff to complete on-pitch evaluation, and encouraging referees to stop a match if a head injury is suspected.

One would expect that at the next World Cup the lessons would be learned, but alas it was not to be. Morocco winger Nordin Amrabat went for the ball and slammed his head on the ground, and then showed signs of a "fencing response", a highly indicative sign of concussion. The concussion was confirmed at the hospital, where he blacked out and lost his memory of the game.

FIFA protocol states that he should be out for at least six days after a confirmed concussion, however, Amrabat played again for Morocco just five days later.

Football has its head up its ass.

Nordin Amrabat is playing for Morocco despite being concussed at the weekend, spending a night in hospital, and the Moroccan FA saying he’d be out for at least a week.

A padded cap does NOT protect from #concussion. #WorldCup pic.twitter.com/qd3ibrrs99

In rugby, a physical contact sport contested by sizeable muscle-filled men, a player who is suspected of having a concussion is immediately taken of the pitch and is temporarily replaced so that the medical team can give a full assessment of at least 10 minutes (as opposed to the thorough three-minute exam in football).

If the concussion protocol comes into effect, the player cannot return to the field in any circumstance, and is not allowed to play for at least a week.

The NFL is further proof that if changing the rules is necessary, the rules will be changed. The long struggle between the players and management of the league eventually led to the NFL acknowledging the problem, changing the protocols, and even paying huge compensation fees to former players who suffered from the long-term effects of inadequate treatment that led to memory and cognitive issues such as depression, dementia, Alzheimer's and chronic traumatic

One of the main catalysts for the changes made at the NFL was the tragic story of former Chicago Bears defensive back Dave Duerson, who committed suicide at the age of 50 after battling with undiagnosed CTE. He shot himself in the chest rather than in the head, and in his suicide note requested that his brain be researched to prove the damage from the concussions he suffered as a player.

Dave Duerson's suicide is another incident that occurred as a result of CTE. After suffering from CTE for many years, Dave Duerson shot himself in the chest. Duerson's final words to his family were “Please, see that my brain is given to the N.F.L.’s brain bank.”

With this in mind, how can the governing bodies of football change the rules to protect the players? A team's medical staff, while dedicated to the well-being of the players, are aware that an early substitution due to injury can be critical for a team's chances of winning a match.

In the case of ​Tottenham, their mounting injury list can be attributed to an incredibly long season after a very short period of rest (Spurs had a lot of players who went far in the World Cup) and the fact that they are the only team in the ​Premier League not to buy any new players this season.

Did the medical staff take this into consideration when deciding whether Vertonghen was fit to return to the field? Did they focus on trying to keep him in the game, rather than taking his long-term health into account? Does the medical staff focus on the Hippocratic oath or serving the interests of the people that pay their salaries? To combat this internal debate from ever occurring, teams should not be penalised by losing a substitution if one of their players suffers a severe injury, as part of the game.

A 'special injury substitution' protocol should be set, in which a team with a player who is showing signs of concussion or any other severe injury are given an extra substitution, which if utilised will require the player to be unavailable for a set period of time. The diagnosis can even be given by a neutral doctor, further preventing any chance of misuse of the protocol.

Rule changes have to be made, and they will be eventually, be it as part of an initiative from the bodies that govern world football or by the eventual litigation of former players. There is absolutely no excuse for not making changes that address the serious issue of concussions and protect the players.