​Leicester City welcome high-flying Tottenham Hotspur to the King Power Stadium on matchday 16, with both sides looking to maintain their impressive recent form.

Back to winning ways 

Meanwhile, Spurs bounced back from their crushing derby defeat to ​Arsenal by dismantling Southampton on Wednesday to ​record a fourth win in five games - leapfrogging ​Chelsea in the process.

A win for either side could prove crucial ahead of a packed winter schedule.

Here's 90min's breakdown of the much anticipated clash.

Claude Puel will be without ​Jamie Vardy again after a ​recurrence of a groin problem that could require the forward to have surgery, whilst defensive duo Jonny Evans and ​Harry Maguire are slight doubts having picked up knocks in recent games. On the other hand, Pochettino will have defender Jan Vertonghen available again after serving a one-match suspension picked up against Arsenal.

Having met in 110 competitive fixtures, Spurs currently gain the upper hand with 54 wins compared to the Foxes 35, with a further 21 stalemates between the sides. 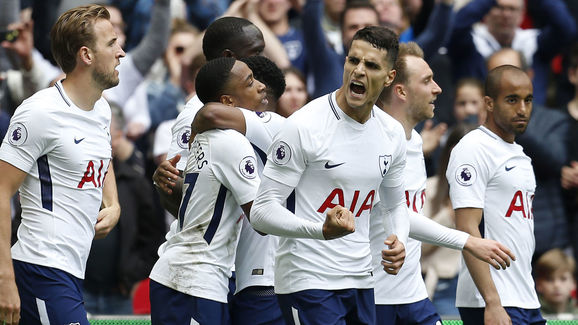 ​Harry Kane and Lamela each netted a brace to edge a ​nine-goal thriller in last season's encounter on the penultimate day to secure a third consecutive Spurs top three finish.

Unbeaten in half a dozen games, Puel's outfit have reacted superbly to their 3-1 defeat at Arsenal in late ​October.

However, four of these have been draws and the news of Vardy's injury will be hard to stomach for the 2015/16 champions, who have found goals hard to come by in recent weeks. Last Saturday's 2-0 ​win over Watford was the first time the Foxes have scored more than two in a game in their mini run.

7⃣ games unbeaten for the Foxes...

Aside from their ​derby defeat at ​Arsenal, Spurs come into Saturday's game in high spirits having registered seven wins from eight outings in all competitions.

Christian Eriksen's return from injury is a huge boost, whose attacking expertise has seen the danish playmaker contribute six assists in 12 games this campaign. Wednesday's win over the Saints was just the third time trio ​Eriksen, ​Deli Alli and ​Harry Kane started together this term - as they valiantly attempt to keep the pressure on the top two.

Here's how each team has faired in their past five fixtures:

With both sides enjoying successful campaigns, neither team will want to slip up in their respective domestic ambitions.

But the key to winning games in the top flight is being clinical in front of goal and Spurs ultimately possess a higher abundance of quality. Without their leading striker and question marks over defensive options, Leicester could struggle to contain the oppostion's attacking force, who should have enough to end the Foxes solid league run.