​Tottenham Hotspurs boss Mauricio Pochettino has said that he is not thinking about his long term future at the club, despite already spending four years in north London.

The Argentinian coach was talking on Thursday about the legacy that Spurs chairman Daniel Levy will leave behind at the club, after initiating and overseeing the development of both the new state of the art training ground facilities and construction of the new White Hart Lane Stadium. 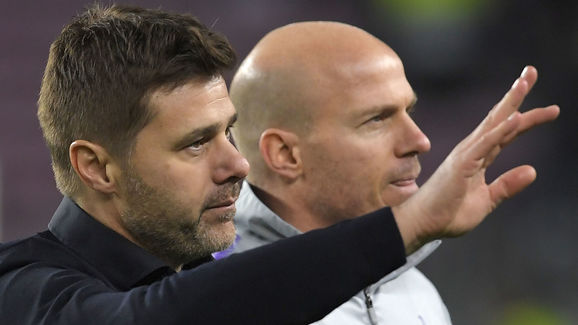 ​Speaking after his side turned their fortunes around in the Champions League to progress into the last 16, Pochettino said of chairman Levy: "He is working so hard, too hard, to leave a legacy forever and I think that’s fantastic."

The Tottenham manager has previously said he hopes to be at the club long enough in order to emulate the likes of Sir Alex Ferguson at Manchester United and Arsene Wenger at Arsenal, and that his everyday work is exactly as as it would be if he were to be at the club for the rest of his life.

When he was asked about the legacy he would like to leave at the club, he explained his thinking in a philosophical manner.

"For me it is about my possibility to work and provide the club what they expect from you," he said. "I have a clear idea of what the club expects from us and I try to do my job in the best condition.

"I am not a person who thinks I want to be here 10 years to build something. I know very well in football you need to take a decision, the best decision for the club, you need to work with the club and the club expects from you that you deliver some work and at the end I know very well that every game is a test for me. "If you don’t win you will suffer. Only if you are responsible and take the decision that is best for the club and you have luck and time you can create a legacy. If not it is so difficult. That is our idea how we work."

Pochettino and his ​Spurs side welcome Burnley to Wembley on Saturday in the Premier League, before keeping an eager eye on Monday's UEFA Champions League round of 16 draw.