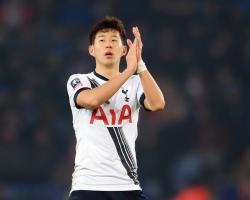 The 23-year-old has been challenged to start living up to his billing as Spurs' third most expensive signing, with Pochettino reluctant to recruit a forward unless he finds someone boasting "the right profile".

"It was important for him to score against Leicester," said Pochettino of Son.

"We want him to fight for a place in the starting 11."

Son could come into the equation for Saturday's Premier League trip to Crystal Palace, as Spurs aim to cope with the Selhurst Park side's physical and pacy threats.

Spurs continue to be linked to a string of strikers, with Barcelona's Sandro Ramirez rumoured to be among their targets.

Pochettino insists the White Hart Lane club intend to be hugely discerning in their transfer business, with England striker Harry Kane in top form and hopes high that Son can find his feet.

"I don't know why we would have maybe more opportunity to win the league if we added another striker," said Pochettino.

"I think that we have enough quality already.

"If we started the season happy with the squad we have, why now do we have to add new players?

"If we find the right profile and we are sure that it would help us improve the squad, we'd sign someone, but we are very happy with the squad we have."

Pochettino has warned his Tottenham players to keep their wits about them against Alan Pardew's wily Palace side, with Spurs' Argentinian boss wary of the home threat this weekend.

"It's a very good challenge for us to try to win at Crystal Palace, it would be a very good position for us if we win the game," said Pochettino.

"The players and the squad are very focused, to be ready, to prepare and to compete.

"We're expecting a very tough game because it's not an easy place.

"We must arrive in a very focused condition, to ensure we can fight for the three points."