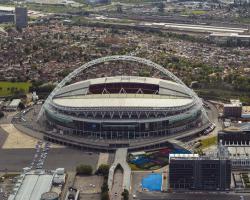 Newspaper reports on Tuesday morning suggested Spurs could be set to play alongside their London rivals at Wembley as both clubs require an interim option while their respective new stadiums are built.

Chelsea are in search of a four-year agreement as Stamford Bridge is redeveloped while Tottenham are likely to only need to move out of White Hart Lane for the 2017/18 season as their new stadium nearby is finished.

The Football Association are likely to find two offers attractive due to the increased revenue they would produce - but Tottenham are believed to be eyeing up the possibility of shipping out to stadium:mk, home of Sky Bet Championship outfit Milton Keynes Dons, as well.

"It's an option to play at Wembley but I don't hear that maybe we will share with Chelsea the option to play there," Pochettino said when asked about reports of sharing Wembley with the reigning Barclays Premier League champions.

Maybe we will in the future but not yet.

"It's a club decision, different possibilities, but we would love to play at Wembley, it's in London and it's close - it's a good option for us but why not Milton Keynes too? Both options are good."

Pochettino was speaking ahead of Tottenham's third-round FA Cup replay at Leicester on Wednesday night - where the two sides meet for a third time in a matter of 10 days having played out a 2-2 draw in their initial cup tie and with the Foxes winning 1-0 in a league meeting in north London last week.

It means, in their previous three meetings this season, Tottenham have been unable to get the better of Claudio Ranieri's side, who remain second in the Premier League behind Arsenal.

"It is a good challenge as they play with a different team in FA Cup, 10 players different from in the Premier League," Pochettino added.

"They change all the team, only kept their goalkeeper and we lost

Now it's a good chance to try to show we are better than them and win the game.

"We are ready to compete tomorrow

We have a good chance to go to next round and the FA Cup is important for us."

Both sides are again likely to make several alterations to their starting line-ups when they meet at the King Power Stadium - but Pochettino insists that does not mean they are prioritising the Premier League over a cup run.

"We have some players in a condition where it's a big risk to play tomorrow," he said.

"We have ahead of lot of games

It's a clear message for our fans - when you are Tottenham or Leicester we need to show respect for the squad."